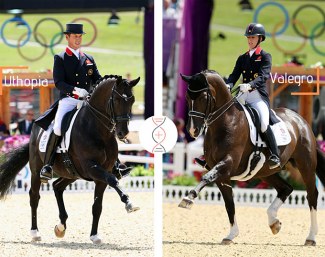 This is the last opportunity to acquire an exceptional In utero foal, broodmare or straw from the Ekestrian Elite Auction, 100% online, which concludes today!

Horse in the spotlight: LOT 6 - In Utero foal by rising star Fusionist, out of the sister of the multi-medalist stallion DAMON HILL

A future stallion or a mare with prestigious origins? The foal to be born out of the sister of Damon Hill and by Fusionist will undoubtedly be a horse with timeless qualities. Damon Hill is one of the rare horses to have crossed the 90% mark on the Freestyle Grand Prix under the saddle of Helen Langehanenberg. In 2014, he is the team world champion at the WEG in Caen and silver medalist in individual. In 2013, he wins the final World Cup in Götebord with more than 88% and is silver medal in team and individual at the European Championships. Damon Hill is the sire of Dailly Mirror 9, the recent winner of the World Cup GP in Gothenburg with more than 77% under the saddle of Benjamin WERNDL. Damon Hill is also the sire of Damon's Delorange, vice world champion 6 year old and vice European champion U25 team under the saddle of Jil-Marielle Becks. Fusionist, the sire of the embryo, has just won the 4-year old stallion test in Verden with an average of 88%.

Horse in the spotlight: LOT 7 - The full brother or sister of DORIAN GREY DE HUS, 5th of the World Championship for 5-year-olds!

In utero foal who will be a champion: The full brother or sister of Dorian Grey de Hus, 5th in the 5-year-old world championships under the saddle of Jessica Michel-Botton with 91.6%. He is French champion in the 4, 5 and 6 years old. This is a historic hat-trick during the big week in Saumur. He is the son of the famous Don Juan de Hus and of Poetin Z CL 1, clone of the famous Dressage mare POETIN, 2003 World Dressage Champion young horse. Poetin Z CL 1 is the sister of 5 approved stallions. This is the line of the famous Samba Hit.

Horse in the spotlight: LOT 1 - Get yourself the champions of Charlotte Dujardin and Carl Hester. In utero foal by Uthopia out of the full sister of the Olympic Champion, VALEGRO!

Get yourself the champions of Charlotte Dujardin and Carl Hester : Uthopia with Weidyfleur II, the full sister of the Olympic Champion, Valegro! Valegro is the most successful horse in the last 10 years. Twice Olympic Champion in 2012 and 2016, twice European champion in 2013 and 2015, World champion in 2014, he is today the record holder of the Grand Prix, Grand Prix Special and Grand Prix Freestyle. Weidyfleur II is also the dam of two approved stallion : U-Genius, who is currently in PSG level, and Integro.

Horse in the spotlight: LOT 5 - Geniaal and the aunt of KASTEL’S NINTENDO winner Nations Cup CDIO5* with Charlotte Jorst

Horse in the spotlight: LOT 15 - Evita-Utopia, Broodmare 3/4 sister of OLIVI, in foal to Koning

Evita-Utopia is the ¾ sister of Olivi (by Jazz) Approved stallion for OLDBG, KWPN, SF. In 2017, he was ranked 18th of the world's best dressage stallions and notably produced Ucelli T, 2nd in the 6-year-old World Championship in Verden, and UB40, exported stallion and 3rd in the KWPN stallion Championship. Evita-Utopia is in foal to Koning, talented young son of Governor who appeared for the first time in 2019 under the saddle of Emmelie Scholtens at the KWPN Stallion Show.

You will also find straws of DON PRIMERO, SEZUAN and DESPERADOS FRH. Find more on the full catalog.

To be able to bid the day of the auction, don’t forget to create your profile on Ekestrian’s website: https://www.ekestrian.com/en/register

For any question about the lots or the auction, contact the Ekestrian team by phone at +33.7.71.27.10.76 or by e-mail at caroduf.ek@gmail.com or contact@ekestrian.com