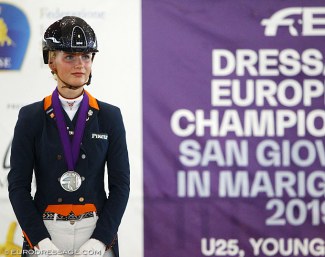 Young riders Daphne van Peperstraten, Kimberly Pap, and Marten Luiten are the new additions to the 2020 KNHS Talent Team which was announced on 24 March 2020.

Traditionally the annual KNHS Talent Team is announced at the CDI-W 's Hertogenbosch, but as the event was cancelled due to the corona crisis, the Dutch Equestrian Federation published the new team online.

Five dressage riders are included in the 2020 KNHS Talent Team: Van Peperstraten, Pap, and Luiten join Jeanine Nieuwenhuis and Thalia Rockx, who were already member of the 2019 team.

Jasmien de Koeyer and Denise Nekeman lost their position on the team, the latter because she has reached the age limit.

Riders on the KNHS Talent Team have been selected by the Dutch team trainers and submission is a recognition of their talent, achievements and promise for the future. Members on the talent team get financial support to pay for extra training and coaching for their top sport career.

The age limit to be a talent team member is 25.