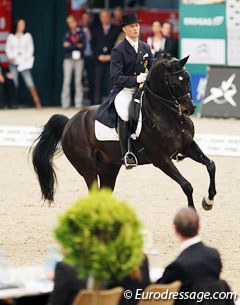 IDRC secretary-general Wayne Channon is back, contributing a column to Eurodressage with a round up on the judging and use of half marks in the Grand Prix at the 2011 World Cup Finals. "The World Cup Final Grand Prix was well judged by any standard

," Channon told Eurodressage. In his column below he divulges on the score disparaties, new judges' positions at K and F and the use of half-mark.

Removing the new judging positions at K and F showed that the judges in the normal positions were in good agreement with each other on the ranking and the percentages for each combination. In fact, 17th place was the only combination for which the consistency (difference between the highest and lowest percentage from each judge) exceeded 5% - the magic number that judges believe should result in a formal review. Adding the new positions at K and F gave an additional 3 combinations where the consistency was greater than 5%.

By and large, the new judging positions did not make any difference to the final result - only 11th and 13th would have swapped places. I have rarely witnessed such close judging. So, my congratulations to all 7 judges! Half-marks – the new trick

I have been a strong promoter of half-marks for many years so I was particularly interested to analyse their first use at a championship.

Up until 2011, riders and trainers have had to make do with integer marks. So a movement for a 7 could equally be a 6.5, a 7 or even a 7.5. Many riders could not understand why after so much improvement they were still on a 7 when in fact they had gone from a 6.5 to a 7.5. Many progressive judges recognised the issue and developed their own techniques for correcting the problem by “carrying forward a half-mark” or giving a “strong 7” or a “weak 7” and then hopefully remembering to use it the next time a movement is between marks. Half-marks is a good solution to this problem.

The Grand Prix has a total of 37 marks. For 17 riders this results in 629 marks being allocated by each judge. There was certainly an ‘A’ and ‘B’ league for the use of half-marks”. Leif Törnblad, Vincenzo Truppa and Gary Rockwell were in a league of their own and showed the rest of the field that it could be done: 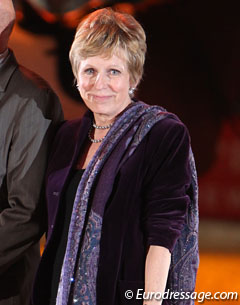 Very surprising to me was Katrina Wüst, one of the greatest pioneers of half-marks, was the best of the ‘B’s (in usage terms not necessarily in accuracy!). However, Katrina did give half-marks consistently across the whole class.

That Stephen Clarke and Wojtek Markowski did not give many half-marks did not surprise me as they are part of the old-guard that doesn’t really believe they are necessary. Still, there is more to this as further digging shows.

The biggest revelation to me was Ghislain Fouarge, the new Dressage Judge General, the top judge in the world, the guy who sets the standard. Ghislain only started giving half-marks for the last 5 to go. NOT the top 5, but literally the last 5 to go. Before this, he only gave a total of 8 half-marks (ie 2% of all marks) for all 12 riders… maybe he is on a quota for half-marks and needed to save them for the best combinations? I would very much like to hear why this was the case and I am sure he will have excellent reasons. Anyway, for the top 5, he reached the ‘A’ League with a healthy 34% of all marks were half-marks. 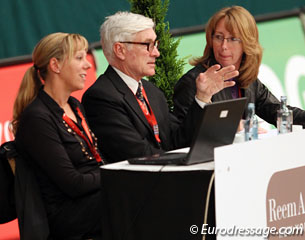 I can understand why it is easier to give a 8.5 rather than a 5.5. There are many, many reasons for giving a 5 or a 6 and the dividing line is not so clear. For an 8 or an 8.5 there are far fewer things that make the difference so our ability to judge excellence is better. Another way of putting it is to say we are more accurate at giving higher marks. This is symptomatic of the way we adjudicate our sport and not in any way a fault of judges.

Wojtek Markowski was the complete opposite of all judges in that he used more half-marks for the lowest 11 than for the Top 6. Wojtek also gave the lowest mark for 3 combinations and was never the highest mark. It could be that he was using the half-marks to be more accurate on the lowest scoring competitors. He is clearly capable of accuracy at the low-end of marks so why not help the guys at the top and give them a bit more accuracy?

We will have to wait for dressage statistician supremo David Stickland’s consistency review of the World Cup but we can see that half-marks are being used by all judges. As time goes on, hopefully this will improve. Certainly judges need time to get used to using them and they need practice but the World Cup Final 2011 was a success and a good start.

- by Wayne Channon for Eurodressage.com