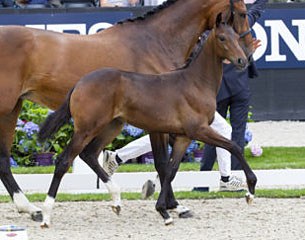 Excellent Dressage Sales (EDS) organises its second auction at the World Breeding Dressage Championships for Young Horses in Ermelo on Saturday 5  August 2017. The first selection day is planned on 30 May 2017. The World Championships auction, supported by the KWPN, offers breeders and owners a unique opportunity of access to a world-class podium.

Sign up for the selection days by sending an email to info@excellentdressagesales.com and include the following information of the horse: pedigree, age, sex, achievements (if applicable) and photo- and/or video footage. For foals one must submit the name, the details of the breeder and the studbook paper of the dam.

The first edition of the auction at the World Breeding Dressage Championships for Young Horses was a tremendous success. The KWPN-approved Four Legends (by Wynton) was the absolute top seller with a final price of 605,000 euro. The most expensive foal was one that stems from the same dam line, the filly Lady Jane (by Apache) that was sold for 52,000 euro. The full brother to dressage legend Valegro was sold to the United Kingdom for 50,000 euro. The average price of the foals was striking as it exceeded 21,500 euro. For the horses the average sales price was 116,750 euro.

By now, the EDS-team, comprising of Nico Witte, Joop van Uytert, Tim Coomans and Joep Schellekens, has abundantly demonstrated its ability to breed, select, manage and train horses to international top stars. The KWPN foal auctions (partners in sales) are offered the opportunity to submit foals and thereby distinguish themselves at the beginning of the auction season.