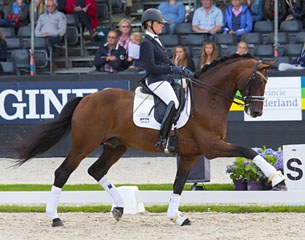 The EDS top collection went under the hammer of the Belgian auctioneer Koen Olaerts. With a total revenue of no less than seven hundred thousand euros and an average nearing €50,000 per horse and €14,700 per foal, the organisation can look back on a very successful night. A total of 22 foals, nine riding horses and one embryo was auctioned.

The top seller was the Oldenburg and Rhineland-Westfalen approved stallion Barroso (by Bordeaux x Saros xx). He was acquired by French investors for €145,000.

At this crowd-pulling auction, Marosi was the top seller amongst the foals. The Daily Diamond x Dream Boy offspring sold for €45,000. High Five US colt Magnum sold to Brazil for 14,000 euro. 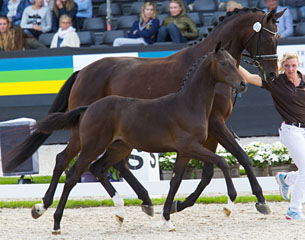 Five-year-old talent Hyde (by Johnson) sold for 80,000 euro to an investor from Hungary. They also purchased filly Mary-Jane, which descends from the same dam line as last year’s top seller Four Legends KS. The Hungarian also bought Maxrava (by Desperados) and Mochi Mochi de Tamise (by In Style). Other foals were sold to France, Italy and Finland.

Monte Carlo (by Dream Boy) was the first foal to enter the ring and made the hammer drop at €19,000. Directly after him, Movie Star Texel (by Toto Jr) changed ownership for that same price. Both foals will remain in the Netherlands.

The flocked in crowd rewarded the performance of Magic Time (by Franklin) with a big round of applause. Her quality was also recognised by the buyers and with €36.000, she became the top priced filly of the auction