Look Who's Back: El Santo NRW 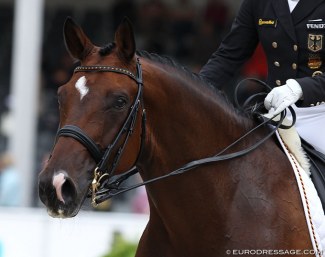 Look who's back in the show ring! El Santo NRW. After an 18 month break from competition the 17-year old Westfalian gelding has returned to national Grand Prix showing as a schoolmaster for Isabell Werth's bereiter, Austrian Lisa Wernitznig.

Wernitznig and El Santo NRW (by Ehrentusch x Rhythmus) competed in the national Intermediair II class at the 2018 CDN Wipperfürth-Kreuzberg on Saturday 28 April 2018 and scored 67.500% to finish 10th in a class of 29 combinations.  The class was judged by Heinz-Holger Lammers, Peter Engel and Catrin Wingender.

The Rhinelander bred El Santo NRW is owned by Madeleine Winter-Schulze and last competed under Isabell Werth at the CDI Mallorca in October 2016. The pair was second in the Grand Prix and won the Kur to Music.

In 2016 Spanish Jose Garcia Antonia Mena made an attempt to qualify El Santo on the Spanish team for the Rio Olympics but after a mixed performance at the national show in Unna-Massen in April 2016, where the horse was second in the Grand Prix but then was withdrawn from the Kur due to soundness issues.

Wernitznig: From Groom to Rider

El Santo is now back as a schoolmaster for 26-year old Austrian Lisa Wertnitznig, who began working at Werth's as a groom four years ago.

"I started grooming and preparing the horses for the other riders and have been lucky enough to have been given the chance to ride," Lisa told Eurodressage about her job at Werth's. "I came to Rheinberg directly from Austria where I had just finished A-levels. Up until then although riding was a big part of my life it was just a hobby."

Wernitznig got the ride on El Santo one year ago.

"He is such a friendly, uncomplicated horse with lots of impulsion and power. He is a real schoolmaster and really honest," said Lisa. "It is so much fun to ride and learn from him. He gives me confidence and is the perfect teacher for the difficult movements. I am so lucky. He really knows what we should be doing and how to do it; much more than I do! I am really trying to learn as much as possible."

Lisa hopes to ride a few more national shows with "Ernie" this year.

"We will hopefully be able to compete in a few competitions," she said. "I am so grateful to his owner, Mrs. Winter-Schulze and Isabell that they have allowed me to ride this lovely horse. He is in really good form so I would obviously love to have the chance to compete him again. It is a great pleasure to ride Ernie."