Where are They Now? Fiontina 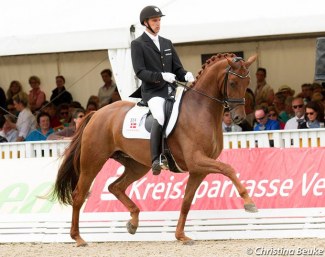 Danish warmblood mare Fiontina was co-responsible for a sensation at the 2015 World Young Horse Championships in Verden, Germany, when she won the silver medal while her ET full sister Fiontini grabbed the gold medal in the same 5-year old finals. After the 2015 Danish Nationals the mare completely disappeared from the scene. Where is she now?

Fiontina, a Star for the Future

Under Andreas Helgstrand, Fiontina placed eight in the warm-up round but moved to a sensational second place in the finals in Verden, scoring 9.02 points.

The chestnut Fiotina was one of Denmark's greatest young horse stars since 2014, first winning the Danish nationals as a 4-year old in 2014. At the 2015 World Championships she was 'slightly' eclipsed by twin sister Fiontini. Still it was a sensational victory as never before had two sisters achieved such an unprecedented placing at the most important international event for young dressage horses. Less than three months later Fiontina reclaimed the Danish Young Horse Title at the Nationals as a 5-year old in October 2015.

Bred by Hanne Lund and Henrik Hansen in Denmark, Fiontina as well as her sister Fiontini are embryotransfer foals by Fassbinder out of Rapitala (by Romanov  x Solos Carex). While Fiontini who went on to become the triple world young horse champion under Severo Jurado Lopez, Fiontina completed disappeared from the scene after that last gold medal at the 2015 Danish Young Horse Championships.

Where Is She Now?

Fiontina sustained an injury right after the Danish Nationals and never fully recovered return to sport. She has now been retired to the field with a new career as broodmare in store for her.

"For a long time, we have been trying to get Fiontina back on track, but unfortunately we had to find out that we could not get her healthy again after an accident on an the aqua trainer," Henrik Hansen told Eurodresage.

Fiontina injured her left hind leg when she panicked on the treadmill and jumped over it. The owners tried everything to get her fit again, but the injury kept coming back. "She was always more temperamental than Fiontini," Hanne Lund recalled. "Now she goes and enjoys life on the fields," Henrik added.

Already back in 2013 the young mare was flushed for embryotransfer. She produced the 2014 born colt Chamberlain (by Charmeur) and the 2015 born colt Grand Cru (by Grand Galaxy Win) which was presented at the 2017 Oldenburg Stallion Licensing in Vechta, but not accepted for breeding. Chamberlain is now a sport horse, while Grand Cru is back in the field.

There have been no foals between 2015 and 2018 from Fiotina. "She has been ridden earlier this year and then got in foal herself to D'Avie," Hansen explained. The mare is now spending her time and pregnancy as a happy broodmare in the field.