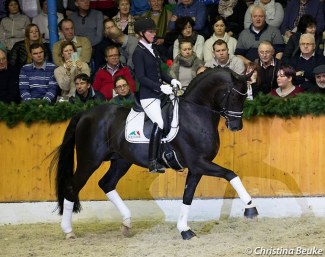 Several of Germany's biggest stallion stations refused to reveal their WFFS test results in 2018 out of fear for economic loss, but a new German law has made it mandatory for all active breeding stallions to be tested as of 1 January 2019 and there is no more escaping.

As one of the biggest stallion stations in Germany, with a large collection of dressage stallions, Schockemöhle amongst others irritated breeders by refusing to reveal the results last year. However now Schockemöhle's American distributor Judy Yancey has blown the whistle and posted the list on the WBG - WFFS Awareness Group group on Facebook on 7 January 2019.

It came as no surprise that Schockemohle's top jumper stallion Balou de Rouet (by Baloubet de Rouet) is also positive, after a large amount of breeders posted the positive status of their Balou offspring on Facebook. Also positive are jumpers Action Blue (by Action Breaker) and Chacgrano (by Chacco-Blue).

So seven of the 52 stallions Schockemohle stands at stud are positive.

The Oldenburg society told Eurodressage at the beginning of the week that the complete list with test results of active Oldenburg licensed stallions will be released "in the next few days."