Pierre-Eric Jacquerod: "Swiss Dressage Has Not Woken Up in Time for Transition" 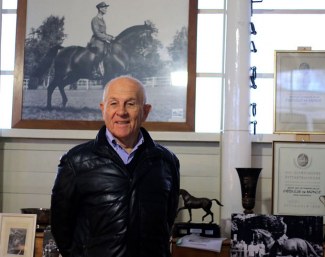 It has almost been 30 years since Swiss dressage riders won a medal at international championships for the last time. Swiss retired I-judge and former head of the Swiss Cavalry School in Berne, Pierre-Eric Jaquerod, believes that a belated transition from military to civilian riding is one reason for the development in his country.

Switzerland recently had a podium discussion with experts, riders, sponsors and parents to find solutions for the future of dressage in the country: Will Swiss Dressage Disappear into Insignificance? A Podium Discussion on the Future of the Sport

In an interview with Silke Rottermann for Kavallo magazine, Jaquerod still doesn‘t see an upward trend towards improvement. He notes too big a discrepancy between the different ideas of training.

SR: Since the end of World War II., Switzerland could celebrate, among other triumphs, three individual Olympic gold medals and numerous individual titles at European and World Championships as well as team medals. Overall the riders of the former Swiss Cavalry School in Berne were responsible for the Swiss glory. In your opinion, is it fair to compare the more modest results of the last few years with this glorious past?

PEJ: It isn‘t easy to answer this question. At the end of World War II, Switzerland, unlike the rest of Europe, had the luck to have come out unscathed. Whereas the European cavalry schools were shut down, whereas breeding was down all over Europe, the two Swiss military stables in Thun and Berne still had about 800 horses at their disposal at the end of the war. Without intending to diminish the successes of those exceptionally gifted riders, who I am still allowed to mention as outstanding examples of good training, but was it really a surprise that Switzerland was that successful in the first post war years?

In the rest of Europe folks had to deal with anything but equitation and overall had to deal with economic reconstruction. The supremacy of the Swiss cavalry riders lasted internationally until the end of the 1960s, after which civilian equestrian sport became the driving force of the dressage sport's development.

It is a pity that the federation rested that long on the laurels of the cavalry riders and some civilians, like Marianne Gossweiler-Fankhauser, Christine Stückelberger and Otto Hofer, instead of understanding the transition to civilian training, in which we would have had the chance to work more closely with Georg Wahl. Jealousy, personal interests and our own mentality stood in our way. So we cry after our old success and do not even know why it was possible.

It was owed to the circumstances I mentioned before and over all to the fact that in the fully equipped cavalry stables about 150 riders and their instructors pushed each other.

PEJ: Unlike in jumping dressage requires a clear line. However, us Swiss are individuals with different mentalities. Because of that it is hard to build up a uniform dressage training like in cavalry times. It would only be possible in an appropriate equestrian center. Additionally our federation consists of devoted amateurs, but at the same it has to deal with professional riders, trainers and organisations.

To take the scepter in hand, we also need to professionalize in equestrian sport. For example, if I hear how the federation and the Swiss Horse Professionals  disagree on many things, this leads to nothing. Because of all these reasons I do not yet see light at the end of the cloudy Swiss dressage tunnel.