Z Flemmenco Back in the Show Ring with Lily Payne 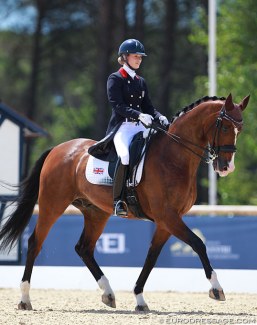 A familiar face has returned to the show arena with a new rider, one of Charlotte Fry's career starting horses, Z Flemmenco. British junior Lily Payne has taken over the ride and made her national show debut.

The 15-year old Dutch warmblood by Flemmingh x Columbus is bred by Bosman-van de Most in The Netherlands and is listed with the FEI as owned by R. Shewen.

Z Flemmenco came into Charlotte Fry's life when the gelding was a 4-year old. He was a livery at her late mum Laura's yard and put up for sale as a 7-year-old working at Elementary. Laura thought he could develop into a perfect junior horse for Lottie.

After Laura’s sad passing in September 2012, Lottie started campaigning both a still-green Dinky and her mom's Remming at junior level. Remming made it on the British junior team in 2013 and Z Flemmenco on the team for the 2014 European Junior Riders Championships in Arezzo, where they scored the best-of-Brits finish with a 10th place in the Kur. At the 2015 European Young Riders Championships in Vidauban, the pair was 18th in the Kur Finals.

Fry competed Z Flemmenco from 2014 through 2017 with the CDIO Compiègne in May 2017 as their last start.

"I spent some time training him to Grand Prix and competed him at Inter 2 in Holland but I really felt he enjoyed the Junior and Young Rider classes more," Fry told Eurodressage.

"It's really nice that she now has Z Flemmenco, they are building up a really exciting partnership," said Fry. "She's aiming to compete him at Junior level."

Lily made her international show debut in the children's division on Beckhouse Cancara (pedigree unknown) in Le Mans, France in October 2016? She competed at the 2018 European Children's Championships in Fontainebleau, where she finished 6th.

Payne and "Dinky" made their first public outing on 26 May in the U.K.

"Dinky and I have made our debut and it’s one to remember," said Payne. "Setting our standards yesterday (26 May) and being able to improve by 4% today (27 May) resulting in a 73% in the AM85 with even more to come is just so encouraging! The biggest thanks goes to the team at home and to Lottie Fry for trusting me with her boy."