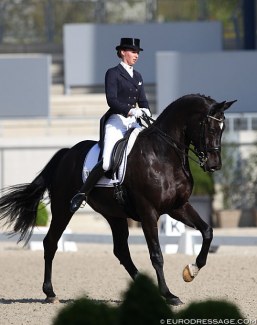 Fierro is a 13-year old German Sport Horse registered Zweibrucken gelding by Furst Heinrich out of Daylight (by Diabolo). He is bred by Bernd Diny and was owned by Mirco Betz.

Fiero was sourced at Isabell Werth's yard, where the black had moved to to be sold.

The past four years the horse was ridden by Fabienne Lutkemeier. The pair competed in just four CDI's in that time period. They made their CDI show debut at small tour level at the CDI Odense in October 2014. In 2016 they moved to Grand Prix level and they did one CDI in Darmstadt as well as placed 9th in the German Developing GP Horse Championship (Louisdor Cup Finals). In 2017 they rode at the CDI Hamburg and in 2018 they did the Grand Prix at the April CDI in Aachen. Their last show together was a national one in July 2018.

Under Werth, Fiero competed just once at the 2019 CDN Ankum in February. They placed second in the Grand Prix with 74.567%.

The 16-year old Emma Lou Becca is Italian born but based and riding for Luxembourg. Coached by Fie Skarsoe, she made her international show debut as a children's rider at the 2015 CDI Saumur on Wyomi. Since then she has competed pony Tckmann's Nougatherz, and horses Komet, Atterupgaards Final Kiss, Gucci Sinclair, and Equestricons Walkure.

Since 2019 Becca's horses has been competing with the prefix Leopard, referring to her father's company Leopard Racing, which sponsors a cycling and motor racing team.