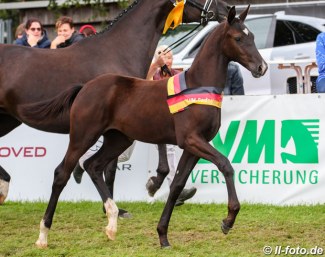 A colt by United Touch S and a filly by Totilas became the winners of the 2019 German Foal Championships held in Lienen, Germany, on 14 July 2019.  The Totilas filly was also the overall high scoring foal at the 2019 Nationals.

Clearly visible from the points achieved the filly category was by far stronger than the colt division. Many of the colts that had qualified for the Nationals did not appear in Lienen as they were sold as stallion and sport prospects between their qualification and the Championships.

In the filly division Wilhelm Klausing's Hanoverian bred Totilas x Zonik topped the board with 101.8 points She got 9 and 9.5 for type, 9.5 for movements and 9 and 9.5 for conformation.

Thirty-three colts were assessed in the finals for male foals born in 2019 and Dirk Lohmann's show jumping bred colt by United Touch S x Con Air was named the Colt Champion. The Westfalian registered colt scored a total of 9.83 poins after earning 9.5 for type, 8.5 and 9 for movement and 8.5 and 9 for confirmation.

The runner-up in the colt division was a Vitalis x Ferro colt, bred by Linda Christine Heij and owned by Linda Heijkoop. He scored 99.17 points in total after earning 9 for type, 9 and 9.5 for movements and 8.5 and 9 for confirmation. The third ranked colt was another jumper bred colt bred and owned by Marcus Döring. The Conthargos x Cornado totalled 98 points.

In the pony foal category Jill Mieleszko-Veken's colt by Golden Grey x A New Star I became the national pony foal champion with 104.6 points. The colt got 9.5 and 10 for type, 9, 9.5 and 10 for movements and 8.5 and 9.5 for conformation. Robert Bayer's filly by Dallmayr K x Breeton Dai was the runner-up with 103.8 points.