Rock My Soul Sold to Canada 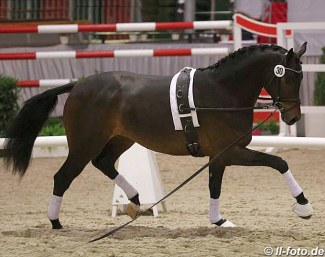 Rock My Soul is bred by Elisabeth Albers and is by Rock Forever out of Fiona (by Furst Heinrich x Alabaster).

Presented by Wilhelm Holkenbrink, he was a premium stallion at the 2014 Westfalian Stallion Licensing in Munster and sold to the Marbach state stud at auction for 85,000 euro.

The dark bay stallion has competed in only three classes in his life so far, all in 2016. He was placed third twice in the riding horse tests under Lissy Eppinger and sixth once under Lukas Mayer.

Rock My Soul is Sigma Warmblood's principle dressage stallion after Hanoverian Royal Blend, which the Celle state stud sold to Sigma at the beginning of 2017, died suddenly in March 2018.