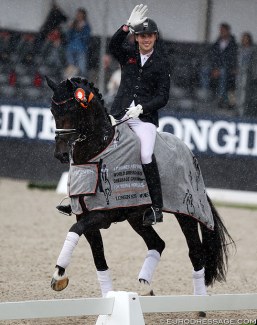 Frederic Wandres and the Oldenburg stallion Zucchero OLD sweetened up the 6-year old preliminary test to take out the victory ahead of 2018 World Champion Revolution at the 2019 World Championships for young dressage horses in Ermelo, The Netherlands, on Friday 2 August 2019.

It was a dreary, rainy day in Ermelo on Friday and thankfully the organizers each year instal covered seating in the main stadium so spectators sit protected and can enjoy the event no matter what weather. What started out as a minor, hardly noticeable drizzle became a cumbersome downpour in the afternoon, giving the young horses an additional challenge to deal with. By the evening the weather had cleared and the weekend is supposed to stay dry. On Friday the footing for the horses upheld well, the spectaor parking lot didn't.

The 6-year old division is always a little less spectacular than the 5-year olds, in which the most popular breeding stallions of Europe show off their smashing gaits and elbow their way to the top of the podium, not taking the gentleman's code of ladies first into consideration. The stallion power is very much liked by the selectors and judges although the mares this year stand out with their lightfooted gaits and elegance. However, quality is genderless and the ranking is according to that. The highest placed mare in the 6-year old preliminary test was 9th.

In the 6-year old class it's a whole different story and this is where the boys are separated from the men, or one could even say, the wheat from the chaff. While a youngster could still cover up training weaknesses with stunning gaits, this is no longer the case in the 6-year old tests that are much more technical and require proper training and riding, and not showmanship.

Zucchero Puts the Icing on the Cake

Zucchero, who sold at the 2017 PSI Auction for 370,000 euro to an Asian investors' family syndicated under the name Star Horses, has muscled up well over the past year. The stallion finished fourth in the 5-year old Ermelo finals in 2018 and became the Bundeschampion a month later.

Today in Ermelo the trot work was active and forward with a good tempo and good fluency in the traversal movements. The extended trots were powerful and ground covering, but the nose could have come out more. The stallion could be a bit more accepting in the bridle and chew the bit more. There was huge overtrack in the extended walk although for a fraction the tempo got a bit too quick. The canter work was solid with two good flying changes, but in the left extended canter the topline lost some swing.

The experienced judges panel, consisting of three 5* judges Fransen-Iacobeaus, Wessels and Baarup together with German judge Christoph Hess, did an excellent job in sorting the field. While there can still be several discussions about some marks too high and some too low -- sometimes they were quite lenient in their submission marks, not downscoring poor flying changes and bridle contact enough - overall they ranked the horses well.

They rewarded Zucchero with 9.5 for walk, trot and canter, 9 for submission and 9.8 for general impression to average a winning total of 9.46 points.

Everyone sat at the edge of their seat to see what kind of ride Andreas Helgstrand would produce on his heart horse Revolution, a Westfalian licensed stallion by Rocky Lee x Rouletto which he bought in parternship with Ecco mogul Hanni Toosbuy Kasprzak for 1.2 million at the 2015 Hanoverian Stallion Licensing.

The huge dark bay stallion had such big ground covering gaits and in the 5-year old division he dazzled every one with them. In the 6-year old class more technical riding is required and it was eager awaiting to see if the powerhouse would be able to collect and carry himself more for the 6-year old work.

Today the stallion proved that he is certainly able to cope with the 6-year old programme, but it's still work in progress and the flying changes are not yet secure on this horse. Helgstrand and Revolution produced very ground covering, scopey trot work, which did not have that regular, rhythmical flow on the half voltes and corners at the beginning of the test, but the horse certainly finds its stride more and was good in the half passes and especially in the forward, straight parts like the extensions, which were fabulous. The rein back was good and there was good relaxation and much overtrack in the extended walk, although the horse has developed a more visible hike up with the right hind hock. Revolution has a big, impressive canter but the self carriage is not yet as well developed and the stallion relies much on his rider for balance, which also shows in the not so elastic and accepting bridle contact. The horse's mouth is not chewing but rider tense. The extended canter was wonderful, the first flying change to the left was not uphill and the second one failed and was executed in two phases. Nevertheless it was a very interesting and lovely test to watch.

Revolution was sandwiched by two Zonik offspring in the top three of the 6-year old preliminary test.

Robin van Lierop and Saskia and Jacques Lemmens' Oldenburg stallion Zum Gluck (by Zonik x Florestan). Lemmens' RS2 Dressage center De Horst purchased the horse at the 2017 PSI Auction for 850,000 euro. In 2018 the pair got slightly disappointed by only finishing fifth in the consolation finals, which sparked murmurs of money wasted.

The duo certainly returned to Ermelo with a vengeance and proved everyone wrong! As first starters of the day, they immediately set the record straight and scored 9.16 to lead the class the majority of the time. They only dropped to third position after Zucchero and Revolution went.

The stallion is not the quickest behind, but he was always nicely up in the frame and had good balance and cadence in trot. He could have shown a bit more bending and flexion in the rib cage in the half voltes, and especially on the right lead, but the lengthenings were very smooth and easy without being spectacular. The extended walk was delightful with much overtrack, a great rhythm and good relaxation. The horse was uphill in each canter stride, but he could have been given more rein in the 'uberstreichen'. The flying changes were effortless although the one to the right was crooked. Van Lierop rode a highly sympathetic test on a very willing Zum Gluck.

The early birds in Ermelo would have seen that the first horse to go got 9 for trot and canter, 9.5 for walk, 8.8 for submission and 9.5 for general impression.

The fourth placed pair in the preliminary test were last year's silver medal winners Matthias Alexander Rath on the Hanoverian stallion Destacado (by Desperados x Londonderry). The chunky, appealing chestnut began with a stretch halt but the final halt was very nice. Destacado was very well balanced in the trot work with fluent traversal movements, lovely extensions and he was always light in the bridle. The walk lengthenings were excellent with real striding. In canter the stallion got a bit tense in the back on the right lead and need to be more forward and swingy over the topline, but the extensions were strong. The first flying change was in two phases and the second could have been straighter. Also the transition down to trot went via walk. Destacado is a lovely horse with a bright future ahead.

Under Wienkamp the big stallion appeared less of a toe dragger. After a year of developing today he appeared quicker behind although his articulation in the hindlegs could still be more fluent. The trot had much bounce though. The left half pass was more elastic than the right one. In canter the horse showed more scope on the left lead, and the flying changes were obedient, although the second one was crooked.

The judges scored Just Perfect an 8.8 for trot, 9.0 for walk, 8.4 for canter, and 8.8 for submission and general impression.

The Blacks Tie in Sixth Place

Two black horses tied in sixth place, which included one of the most gifted horses for the future of the entire field of 6-year olds: Zhaplin Langholt.

The Danish warmblood Zhaplin Langholt (by Zonik x Stedinger) was eliminated last year because he drew blood in the mouth in the Finals. After Ermelo he sold to Danish-American Grand Prix rider Charlotte Jorst who competed him briefly in Wellington in the winter, first with the intention to qualify him for Ermelo for the U.S.A. herself, then changing her mind on not having the youngster do the heavy task of showing in Ermelo at all, and then changing her mind again with Andreas riding him for Denmark. Today he started in Ermelo with Helgstrand and Solyst (his former owners) still listed as current owners, but it must be said that the score board has been broad casting a ton of inaccuracies, especially on the gender of the horses.

Zhaplin has an incredible movement mechanism and is strong horse behind. He has fantastic scope and elasticity in trot, but he struggled to show a regular rhythm as he was not entirely through the back and in the contact. There was a break in the rhythm on the half volte and at the beginning of a trot extension, but he was super floaty in the half passes. The horse could be more clear in the rhythm in the extended walk. Zhaplin has a super canter with an engaged hindlegs but the flying changes were not secure.

The highest scoring KWPN horse was Dutch duo Bart Veeze on Theo Driessen's stallion Imposantos (by Wynton x Krack C). The trot was up in the frame with very good self carriage. The horse really climbed in the shoulder-ins but then dropped in the poll in the right half pass. The extended walk had much overstep and he strode well through the body. Overall the horse was tense in the contact, which showed in his rigid upper lip. The canter work was very solid with good lengthenings, but the horse loses some elasticity in the back. The first flying change was short and the second crooked. They scored 9.2 for walk and trot, 7.8 for canter, 8.5 for submission and 8.9 for general impression to average 8.72 points.

The Bays are Eight and Nine

Hans Peter Minderhoud rode the KWPN stallion In Style (by Eye Catcher x Lorentin) for owner Joop van Uytert and finished eight with 8.54 points. The trot was supple and active but not yet as balanced which showed in the bopping head. In the extended walk the stallion had two hooves overtrack and showed a good, clear rhythm. The canter has nice uphill strides with big flying changes but also the self carriage needs to improve still. They received 8.3 for trot 8.6 for walk, 9.0 for canter, 8.0 for submission and 8.8 for general impression.

Bernadette Brune slotted in ninth aboard her sympathetic Oldenburg mare Feel Free OLD (by Foundation x Sandro Hit). Coached by her assistant trainer and former WCYH participant Anja Engelbart at this event, Brune and Feel Free began with a very nice halt at entry. In trot the mare is light footed and cadenced showing great lenthenings, which were slighly rushed, and good half passes. Overall she was a bit too much bent to the left. The extended walk had good overstep and was ok in the rhythm but came across as hurried. The quality of the canter is better on the left lead with more jump and a clearer 3-beat rhythm, but the extensions were uphill and without a doubt Feel Free showed the two best flying changes of the day! She scored 9.0 for trot, 7.5 for walk, 8.7 for canter ,8.3 for submission and 8.6 for general impression.

Eurodressage was on the scene photographing all 5, 6 and 7-year olds. If you are interested in photos for print or social media, send us an email.