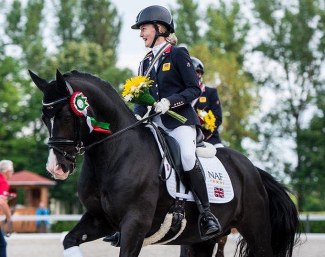 The 10-year-old Welsh Cob stallion "Valhallas Zorro" is now for sale, as his present co-owner and rider Holly Kerslake turns 16 in December 2019.

Valhallas Zorro has been competing very successfully in FEI dressage at international level since 2015 when he started his career with the Danish rider Anne-Mette Lyager. In the beginning of 2016 he was sold to the Kerslake family in Devon, and since then he has been ridden by Holly Kerslake.

Valhallas Zorro was bred in Denmark by Karen B. Olsen and Carl Trock of the Valhalla Stud and they have kept a share of the stallion, who is also a successful sire of champion stock.

Valhallas Zorro has a list of results that is far too long to mention, but here are some of the best:

Valhallas Zorro is a beautiful, black purebred Welsh Cob stallion that oozes presence, quality and caliber. As a youngster he won numerous championships in the in-hand rings as he is very correct, well built and a powerful mover that likes to attract attention and ‘show off’. Having said that he is a very kind, cooperative horse in all ways, and in spite of the fact that he is an entire stallion he is very easy to work with in all situations. His temperament and will to please his rider is extraordinary - which can also be seen from the fact that he constantly scores above 70 % in top company and probably is one of the most consistent ponies on the circuit.

We are looking for a new 5-star-home for Zorro, with a highly talented and ambitious rider and a team that can secure that Zorro continues his career at international top level.

And if we can’t find that home, we might consider offering him for lease for at least 2-3 seasons.

If you have questions, and want to see videos and/or are interested in a test ride, please contact