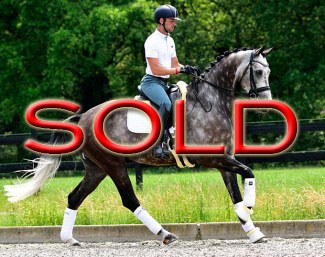 Hayden is a modern dressage athlete with sport in his genes.

Dam Uhway (by Norway x Pion) is an elite sport preferent mare and has competed at Prix St Georges level, just like Hayden's full sister. Grand dam Kirstel (by Pion) is a keur preferent prestation mare, who competed at ZZ-Zwaar level in The Netherlands. All her offspring has competed in sport, minimum at Z2 level and one up to Grand Prix level, Utah (by OO Seven).

These two lines together have produced Hayden, who has been proclaimed "ster" by the KWPN society and is competed at Z2 level.

Hayden is an energetic horse, in a positive way, who is light on the aids. He makes an ideal match for a rider who is ambitious to compete successfully.