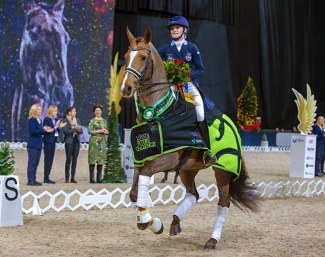 Four young U25 riders and four young GP horses were battling for the title and no less than SEK 200,000 (19,000 euro) in prize money. In the end, it was Isabella Tovek with Happiness and Johanna Due-Boje with Mazy Klövenhöj who took home the victory.

To add extra entertainment and education to the final, the rides were publicly commented on by Swedish team rider Patrik Kittel together with world champion Isabell Werth. The Finals of each division is contested via the Short Grand Prix test.

“It's great fun to have this opportunity to ride in the this arena," Tovek commented. "I am very happy with my horse who was relaxed and listened to me nicely."

Isabell Werth commented that, "Isabella did a really good job. I might have missed a little more bending and elasticity in the movements. I liked that Isabella improved the piaffe in the moment itself, when it started to get a little bad, she worked her way up to a nice piaffe. The transitions were very nice, they made good flying changes and nice pirouettes."

Johanna Due-Boje with the 11-year old Swedish warmblood mare Mazy Klövenhöj (by Bocelli x National Zenith xx x Record Token xx) won the Championship on a score of  69,821%. The mare is bred by Annette Karlsson and owned by Pernille Primdahl.

“My horse did well and was very good in the arena," said Johanna. "it's great to get comments from Isabell after the ride too. Lövsta Future Challenge means the great deal for Swedish dressage and it encourages young riders as well as seniors to develop their young horses."

Due Boje and Mazy Klovenhoj have already been competing in the senior division this year and were fifth in the 2019 Swedish Grand Prix Championship last summer.

Isabell Werth commented that "this is really a top horse with a lot of talent for dressage. It might be good to try to give her a little more confidence and a chance to relax a bit."

It was an emotional last ride for Ida-Linn Lundholm on the 10-year old Dutch bred Empire (by Wynton x Wellington), as the horse has been sold to Linda Holste in the USA. In their last competition together, Lundholm and Empire received 65,128% which placed them second.