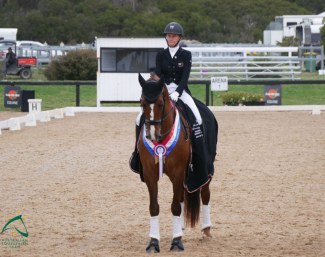 New Zealand environmental engineer Wendi Williamson has won her way to a second FEI World Cup Final after victory in the Pacific League Final at the Serata Equine Victorian Dressage Championships in Boneo, Australia, on 14 December 2019.

After a second place in the  Grand Prix, Wendi and her New Zealand bred Hanoverian gelding Don Amour MH (by Don Frederico x Anamour) took out the  Grand Prix Freestyle to win the right to represent the league at the 2020 World Final in Las Vegas in April.

Nine Australian pairs and one New Zealand pair had qualified and were declared to compete at the Pacific League Finals in Boneo. However, just five showed up for the event. Bush fires across New South Wales prevented several riders from traveling to Boneo for the event.

Wendi and Don Amour MH scored 72.3% in their freestyle with runner-up Fiona Selby aboard Tacita on 71.865%. Wendi was both relieved and very happy to have won the league aboard her 12-year-old gelding.

“In the context of this trip, given that we arrived just the day before the Grand Prix and he’d had no warm-up rides or workouts all week, I think I will look back and consider he did a good job for me,” she said. “I came here because I wanted options to compete internationally so at this stage I will be taking the opportunity I have been given.”

“She rode very positively and it looked like she really meant business from the start,” said Wendy. “Any time a New Zealander wins in Australia it is something to be really proud of. Wendi rode it well and has the horse looking in magnificent order.”

Wendy felt it was also a big tick for New Zealand’s breeders.

“This confirms that our development is on track, especially since most of our horses are New Zealand bred and produced by New Zealand riders. It is a real credit to the breeding industry here for the clever way they are producing international quality horses.”

It is not the first time Wendi has won the league and headed to the world final. She and the late Dejavu MH won in 2017 and competed at Omaha in the final in the United States that same year.