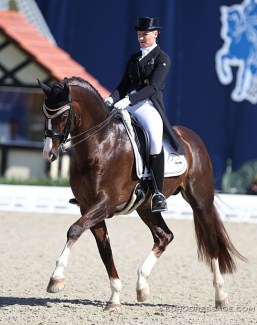 The 9-year old KWPN licensed stallion Gunner KS has been gelded to be focused on sport.

Gunner KS was a licensed KWPN stallion (by Belissimo M x Vincent x Donnerhall) and he is bred by Annette Kleijwegt and her late husband Arthur.

The liver chestnut was first competed by Laurens van Lieren, followed by Dana van Lierop getting the ride.

Van Lierop rode him at the 2016 and 2017 World Championships for Young Dressage Horses. In 2016 he finished 28th in the 5-year old preliminary test but did not start in the consolation finals. In 2017 he was 7th in the 6-year old Finals.

In 2018 he missed out on the World Championships due  to an injury. In February 2018 he returned to win the 2018 KWPN Stallion Competition Final in Den Bosch.

In the summer of 2018 Madeleine Witte-Vrees took over the ride, but  at the beginning of December 2018 the stallion sold to Andreas Helgstrand. Just days after his arrival in Denmark, German Grand Prix rider Bernadette Brune bought the horse.

Brune and Gunner competed at three national shows in Germany at small tour level in 2019, Ankum, Hagen and Scharnebeck.

In December Bernadette decided to have Gunner gelded as he behaved too stalliony at home and at shows.

"He was difficult and screaming at competitions or when we had horses in the field," Brune told Eurodressage. "Now he is very sweet and working much better from behind. We have plenty of frozen semen if needed."

Between 2016 and 2019 Gunner KS has sired quite a bit of offspring in The Netherlands. Lucky L (out of a Sir Sinclair dam) was approved at the 2019 KWPN Stallion Licensing but still needs to do his performance test.