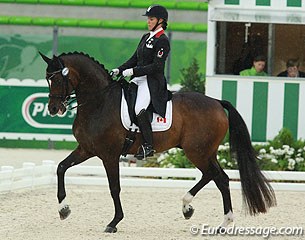 Karen Pavicic's request to launch an investigation into judging bias and unethical behaviour of an official in the lead-up to Canadian Olympic team selection has been handled by the FEI and closed.

An FEI spokesperson told Eurodressage that, "after careful consideration by the FEI Dressage Committee, and then by FEI headquarters - which was tasked by the Committee to follow up in a fair and thorough manner - it was decided that no further actions are necessary and this matter is now considered closed."

In July 2016 Canadian Olympic team candidate Karen Pavicic filed and lost her appeal with the Sports Dispute Resolution Centre for Canada (SRDCC) on her beliefs that the Canadian Olympic selection was not done fairly because of judging bias. She also requested an investigation from the FEI.

Canada was represented at the Olympics by two individuals: Belinda Trussell and Megan Lane. Pavicic felt that Canadian judge Elizabeth McMullen had deliberately upscored Lane to put Pavicic down in the ranking for Olympic selection.