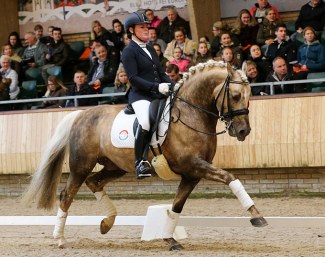 Stunning Dutch Riding Pony stallion, licensed for breeding and with an amazing character.

Don Bosco du Bois is advanced in his training, having competing at Z2 and M-level in The Netherlands (with flying changes) and is schooling at Prix St Georges level at home. Of course this makes him highly suitable as FEI Dressage Pony. He goes easily in a double bridle as well as in a snaffle.

This fantastic palomino stallion has had both a career in sport and breeding the past few years and has produced foals that have gone to foal shows, winning medals in Germany. They all stand out by their amazing character which has been passed on by the sire.

He scored the highest mark in the Stallion Performance Test of his crop and made an impression both in dressage and show jumping.

At home he's schooling at Prix St Georges level. He is easy and loves to hack out in the forest, loves to take a small jump over fences. He is a highly talented and very competitive, versatile pony which would be a dream for any rider.

Located in Boxtel, The Netherlands (close to Eindhoven airport)