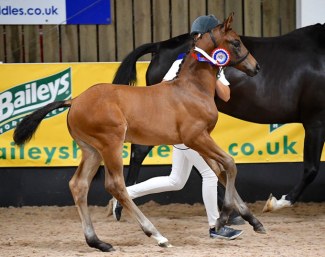 Merikanto is an exquisitely bred Elite Oldenburg foal who has been described as having “Outstanding presence” having been awarded "Elite" status with a Vet Score of 9.5 and a Conformation & Paces Score of 9.1 at the British Futurity show.

This highly decorated foal was regional champion at the Elite Foal Tour with a score of 8.5 and ended up winning bronze at the British National Foal Championships. He was named “Best Oldenburg Foal” by The Oldenburg Verband (GOV) and received "Elite" Status from GOV too.

Morricone is a sensational young stallion who has been overwhelmingly popular in his first two seasons at stud. From a Trakehner sire and an Oldenburg damline, he brings together the very best of German breeding. He has exceptional temperament, easy rideability, expressive paces, powerful hindleg and perfect conformation. He was the Oldenburg Main Premium winner at the 2016 licencing and won the dressage index at the 30-day test with a final score of 9.33. The judges gave him 9.0 for his trot and canter and 10.0 for his walk. He was the 2014 Oldenburg Champion Stallion. Morricone’s Sire, Millennium, is a renowned stallion-maker, and comes from a line of grand prix Trakehner stallions including the legendary Gribaldi, sire of World and European Champion Totilas, Grey Flannel, Painted Black and countless other exquisite stallions. His Damline is from Royal Rubin OLD who has produced 26 licenced sons to date and was the Premium winner of the Oldenburg and international Grand Prix series.

Although bred in the UK, Merikanto’s dam Showgirl Princess has been graded by Oldenburg Verband and gained entry into their Marebook 1. Her paces are balletic and her temperament is second to none which she has passed on to her foal. She was awarded 1st at the British Breeding Finals in the Broodmare 6-+10yrs category.

Dam Sire Showmaker was 2006 international Dressage Horse champion and 2007 Hickstead national and international five-year-old champion, ridden by Garry Williams who described him as “so smooth to ride, he is like driving a Bentley”.  Showmaker’s sire, Show Star (Oldenburg) was Vice Federal Champion in 2002 and the price leader in the Elite auction in Münster-Handorf. Showmaker’s grandsire is the legendary Sandro Hit (Oldenburg) who is in a league of his own! World and German champion, since 2012 Sandro Hit has been ranked in the top ten dressage sires in the world and since 2017 has been ranked 2nd. He has produced 190 licenced stallions in Germany alone and 237 State Premium mares along with 11 German Champions.

Merikanto has an amazing temperament and is very well handled