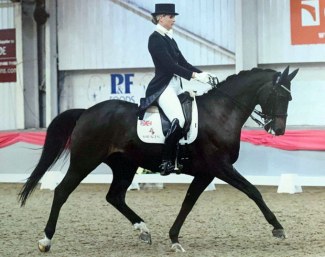 Renoir is a rising 11-year old elegant gelding with three very correct paces. He is extraordinarily trainable and very quick to learn new movements. Renoir would suit a young rider who is targeting a team place or a rider who wishes to go out at Premier League or CDI Small Tour level. He has a great engine and a can-do attitude, now a seasoned International Small Tour horse with capacity for higher levels.

Competed at International Small Tour level in the United Kingdom and in Belgium during the 2019 season with 5th and 6th placings. Renoir only started his successful Premier League Small Tour campaign in April 2019 and swiftly progressed on to the International scene with British Dressage selectors calling him up twice in only six weeks due to his achievements. Renoir, albeit smaller in stature, stands out with his elegant profile and is rewarded by judges for his correctness in movements. His smaller stature and quickness in mind, makes the advanced and complex tests very manageable to ride on him.

Renoir has three correct and active paces with a super hind leg. Performs all lateral movements with great ease. Renoir has established expressive changes up to 15 one-tempis. Passage is well established and piaffe underway. He carries himself willingly and freely.

This horse is a clever and kind person to be around, he enjoys hacking and is easy to deal with at home and away.

Renoir's elder brother, Russki, who is schooling at Grand Prix level and competed at international PSG level, is also for sale.