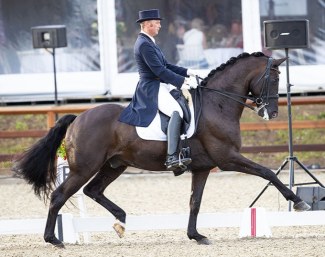 Home bred, trained to Grand Prix and competed by the same owner throughout his life, Gucci H is a wonderful, competitive Grand Prix horse with much in the tank for the future.

This elegant, long legged black gelding is by the Trakehner sire Gribaldi, who also produced World Champion Totilas. Gucci's talent was obvious from a very young horse. He was competed in young horse classes in Belgium and carefully brought up the levels. He began competing at Grand Prix level at the age of 9.

Gucci H is a very consistent performer and a reliable competition horse.

Recent X-rays from 2019 available upon request, including of neck and back