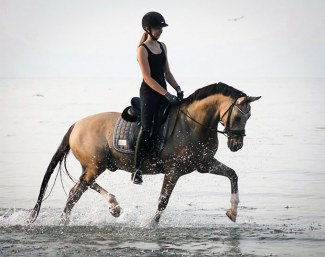 Præst’s Cameo is a beautiful buckskin FEI dressage pony with big potential and who has not yet reached his peak.

Bred and owned by this seller, Cameo has been ridden by Fie Dybro Jensen the past three years and she developed him from elementary to FEI pony level.

Cameo has three good, rhythmic basic gaits and wonderful rideability. He is always welling to work and very easy to train, always saying yes to his rider.

He has a proven show record and is currently at the top of the Danish rankings. He has achieved placings both nationally and internationally and achieved several results over 70%. Cameo was the winner of the Danish Young Pony Championships as a 5-year old with scores over 80%, and he won all three FEI pony classes at the international 2020 Norwegian Horse Festival in Lillestrom, scored up to 73.167%.  In the past two years he qualified for the Finals of both the Ecco Cup and Danish Championships.

Cameo is a wonderful personality, easy to handle in different surroundings. He has no vices, is easy to load and trailer and loves attention.

This is a super opportunity for a pony rider who wants to reach the top.

Located in Denmark, no lease.