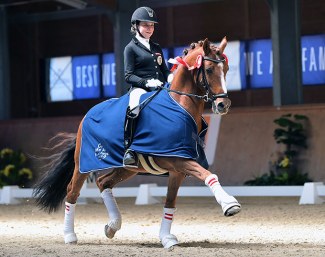 Chantre is an top international FEI Dressage Pony. He is a licensed premium stallion who loves to show off and present himself. His energetic aura makes him an eye-catcher in every arena.

He began his international career at FEI pony level under a German rider and competed at CDI's in 2017 and 2018 with consistent 70% marks. In 2018 Chantre he qualified for the "Preis der Besten" in Germany.

Chantre then sold to Austria and his outstanding performances immediately qualified him for the national squad.

In addition to this strong performance at the Europeans, Chantre achieved several top results in national and international shows: He competed in international tests in Mariakalnok (HUN), Wiener Neustadt (AUT), and Pilisjászfalu (HUN). At the CDI Exloo (NED) he finished his Freestyle test with 75% and won the individual test in St. Margarethen (AUT) with 72,793%.

This smashing stallion is a real family pony and has so much more to give to his next rider.