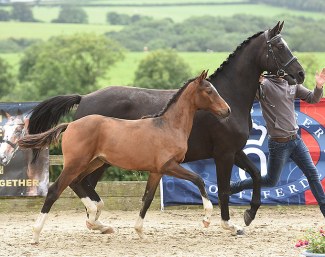 The dam sire is Furst Romancier, Hauptpremium stallion and sire of 56 approved sons with top selling offspring such as For romance (750,000 euro) and Fasine (1.3 million euro). Furst Romancier also has many offspring performing at Grand prix level such as First Romance, Florina and For Romance.

Don Alvaro’s  dam combines the legendary Edoste line with the epoch making Westfalen stallions Paradox I and Argentinus. His grand dam was an elite Westfalen mare who herself competed at M* level by Peking the jumping bred stallion who competed at grand prix dressage and produced several licensed stallions.

This colt is a serious competition and stallion prospect with a great character included, his maternal sister was sold to an International Grand Prix rider.

Located in the UK.