Youngstock for Sale: Filly by Vaderland x Danone I 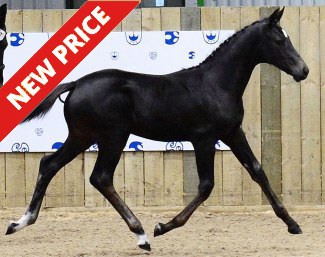 Very Fein is a super filly by Vaderland

Vaderland was reserve champion at the Westphalian stallion inspection. The Vitalis son completed the 14-day test in Adelheidsdorf in the spring of 2019 with an excellent dressage-oriented final mark, a 8.74, the second best dressage result. He received an 8.0 for his walk and trot, for his canter he received a whopping 9.5. Character, temperament and willingness to work were awarded a 9.25. He received a 9.75 for his ride-ability.

Vaderland also performed well in the sports test in Münster-Handorf in March 2020. He finished with an average of 8.48. For the walk and canter he received an 8.5. The stallion scored 8.6 for ride-ability and overall impression. In the final of the Oldenburger Reitpferdechampionat Vaderland won bronze in the hands of Annika Korte.

Very Fein was awarded graded as a Premium Foal at the Hanoverian foal show at Hawtins Stud in Gloucestershire in August 2021. She has a correct confirmation with three expressive, balanced & large gaits. She has a lovely character and is very quick to learn and easy to handle.

All in all, a very promising dressage prospect for the future!