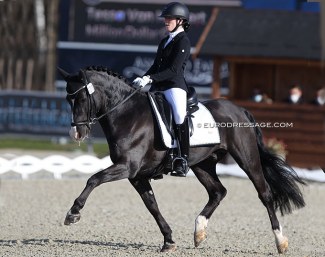 Under British Holly Kerslake he had three successful years at the top of international pony sport with several international wins and consistently scoring 70%+ marks. At national level he even achieved marks up to 76%. They represented Team Great Britain at the Europeans in 2017 and 2019 with a bronze medal as highlight.

Zorro has taken his current rider and owner into the international arena with great success. They won the Freestyle at the CDI Montefalco with 72.775% and have been regularly scoring round 68-70%.  They represented Ireland at the 2021 European Pony Championships in Poland and scored 70.143% in the team test.  His rider has now reached the age limit and sadly has to move on to horses.

Valhallas Zorro is a very sweet stallion that is easy to handle and a pleasure to ride. He never gets spooked and is totally reliable in the arena.
He is the perfect schoolmaster for someone looking to compete at the highest level of international pony sport.

Video and X rays on request.