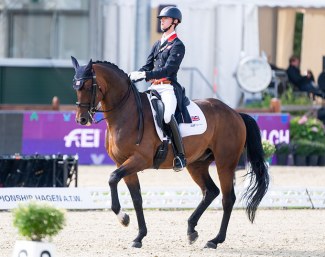 A unique opportunity to buy this FEI Under 25 Team GB horse with the ability to compete on the International Senior circuit with his next competition partner. Diego has competed for Great Britain at three European Championships: in 2018, 2020 and 2021.

Diego is remarkably consistent with scores over 70% including two at the European Championships in Hagen, 2021.

Age 13, Diego has been owned by Lewis Carrier and his family, and ridden by Lewis, since 2012. Lewis and Diego are based in the UK. They were at Eilberg Dressage where Lewis worked and trained for nearly five years, then with Anna Ross at Elite Dressage for 12 months, before Lewis set up his own small yard. They are currently training with Gareth Hughes through the Team GB World Class Programme.

An exceptional traveller, Diego has made many trips to Europe, including the 2,000 mile four day road trip to Hungary to compete in the European Championships in 2020.

Diego has a proven record over the last four years as Great Britain’s top Young Rider and Under 25 horse, with 10 wins from 17 starts at international competitions in the UK, including three wins from three at Keysoe International, 2020. They are currently ranked 12 in the FEI Under 25 World Rankings (September 2021).

Lewis and Diego have recently started their Senior campaign, placing third at the British National Championships at Inter II (September 2021). At just 13 years old Diego would be the perfect Team horse at any level.

Diego is a genuine horse, a family favourite, equally happy at home and competing, with a rare talent for producing his best tests on the biggest stages as exemplified by his performance in the Future Elite Young Dressage Horse competition at the Horse of the Year Show in 2018, in front of over 7,000 spectators.