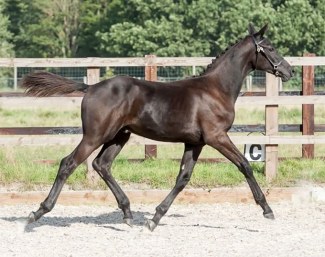 This stunning colt, just missed his reserve, being 'top lot' at the 2021 British Breeding Elite Auction, that was broadcast on ClipmyhorseTV. He is an exceptional foal, that impressed the evaluators, with Rik van Miert, honorary member and ex VP of the World Breeding Federation, naming him ' Mr. Slick' because he really does have it all!

Beautiful to look at, with an exceptional frame and conformation, gaining him a 9.25 with the judges. He also has three elastic paces, which scored him a 9 for his walk and an 8.5 for both trot and canter.

He is out of Glamourdale, Glamourdale has not only made an exceptional start in his competition career, which saw him winning the 7yo FEI - WBFSH World Breeding Championships at Ermelo in 2018 in a breathtaking performance and has more recently taken him to international Grand Prix wins in his first season at that level. His pedigree is equally impressive, offering a compelling cocktail of Lord Leatherdale, the maker of champions, and Negro, who requires no introduction. His mother is particularly interesting. Apart from Glamourdale, she has produced two ‘Elite’ daughters and is a full-sister to Spencer Wilton's Grand Prix horse Numberto. Further back, we encounter great grandam Clementine, the mother of none other than Michael Whitaker's famous international show jumper Händel.

Romeo's dam Granada is by the Metall son Ufo, and behind comes the influence of the WBFSH leading sire Jazz. She is an Elite, IBOP, Prok mare, who scored 78 in her performance test, with an 8 for her trot, canter, and rideability.
She is a half-sister of the KWPN reserve licensing champion Ierland. Her mother is a half sister of the stallion Bristol, who competes internationally at PSG/Inter 1 with Kirsten Beckers and the Grand Prix horse Raoul who competed for the USA under the saddle of Sarah Lindsten.

Romeo will really make your heart sing, not one to be missed!