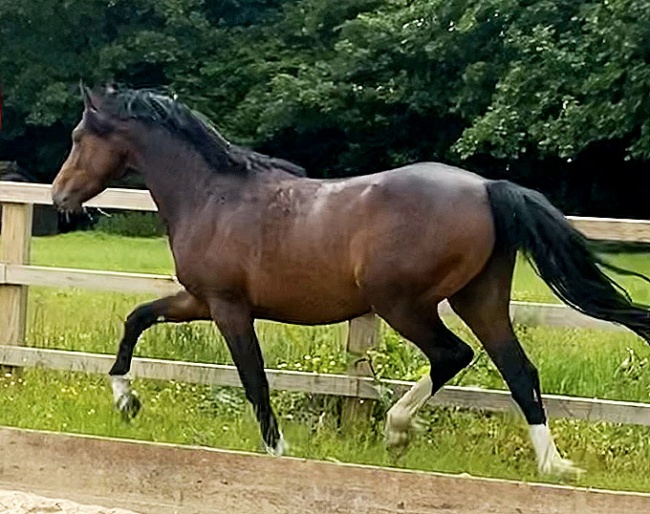 Bay colt by Caesar 171. This colt is is very flashy and very like his sire to look at and with a similar movement. He has a lovely temperament and has the potential to make a future FEI Dressage pony.

Sadly Caesar died this year and this is an extract from British Dressage news saying farewell to him.

A mainstay of British pony dressage between his arrival on these shores in the late 90s and his retirement in 2008, not only was Caesar 171 one of the most prominent British competition ponies of his time, but he also leaves a great legacy thanks to his success as a breeding stallion.

Numerous British team ponies over the past decade have been direct descendants of this consistent stallion. The extent of this accomplishment was never more evident than in 2017 when four of his progeny were on the longlist for the British team for the FEI Pony European Championships – LE Chiffre, Cruz III, Ella BS and George Clooney BS.

All these ponies have enjoyed successful international careers and are still on the circuit today. Cruz III is notably competing at Inter I for Jayne Turney, George Clooney BS, who was on the European Championships team with Sophie Taylor in 2018, is campaigning FEI Pony competitions for Mette Dahl, LE Chiffre competed at the 2016 Europeans with Lara Kuropatwa, while Ella BS and Gracie Morgan represented Great Britain at the 2021 FEI Pony European Championships in Strzegom, Poland.