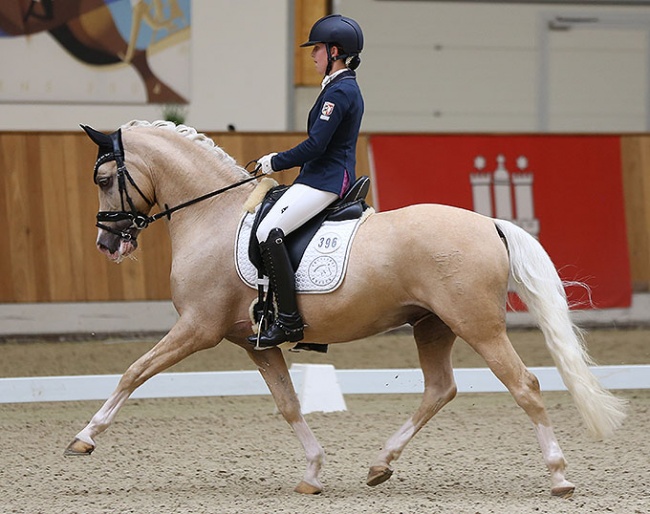 He is a beautifully bred German Riding Pony by Casino Royal K, who was the 2007 Weser Ems licensing champion and who became Bundeschampion in 2008 and 2009. Dam Sire Wimbledon was one of German Olympian Sönke Rothenberger's international dressage ponies.

Carribean Dream has the genes for a top level FEI dressage pony career. Although a stallion, he is not standing at stud, nor behaving like one.

This stunning palomino has an extensive and impressive performance record:

- He was Champion Stallion at the 2014 ZfdP Stallion Licensing
- He participated in the Bundeschampionate as a 4 year old, 5 year old, and 6 year old.
- In 2016, he placed 5th as the most successful Dressage pony nationwide in Germany.
- He qualified 3 times for the German Championships.
- He placed 3rd in the International Dressage Cup for Young Ponies in Verden
- He has won multiple times the pony division with over 70%
- In 2022 he has won at FEI pony level and has been started successfully in M* level tests.

“Carribie” is a dream to ride and a pleasure to be around every day. He is always motivated to work and to compete, very uncomplicated to travel and steady in new surroundings. He does everything for his rider and has been a dear family member to his current owner.

Trained by his breeder and owner, he took two riders to the German Youth Rider Championships. Now he is waiting to find a new home and help a new up-and-coming rider to make the next step into the big ring.

Looking for a five-star home with qualified family support. A dream would be a forever home.