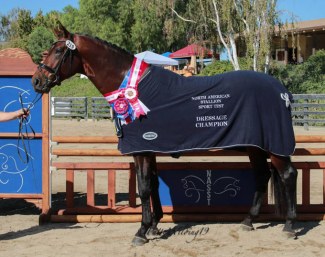 Eight dressage bred stallions and eight show jumpers were initially entered, but seven dressage stallions competed in the East and West coast testing.  Four passed with a minimum score of 7.5 or higher, three failed the test.

The overall high scoring dressage stallion was Koning DG, a 4-year old Dutch warmblood by Bordeaux out of Darcy CL (by Jazz x Junior). He is bred and owned by DG Bar Ranch in California. He scored a total of 8.95 points after earning 8.5 for walk and trot, 9 for canter, 9.5 for rideability and 9 for general impression.

The second highest scoring stallion was Nancy Holowesko's 4-year old Oldenburg stallion Fellini CF (by Finest out of). The black earned 8.30 in total with 8.5 for walk, 8 for trot and canter and 8.5 for rideability and general impression.

The 4-year old Hanoverian stallion Dionysus MF (by Doctor Wendell MF x Rotspon) scored a total of 7.85 points. Bred and owned by Maryanna Haymon, the dark bay earned 9 for walk, 7 for trot, 7.5 for canter, 8 for rideability and 7.5 for general impression.

Lisa Smith's 5-year old Hanoverian stallion Frisantos (by Franziskus x Espri) got the fourth best score of 7.70 in total. He earned 7 for walk, 7.5 for trot, and 8 for canter, rideability and general impression.

The stallions that did not make the cut were Davos CF (by Dante Weltino x Rubinstein) with 7.25, Fernandel of Hillock (by Franziskus x Donnerhall) with 7.20, and Wild Escort (by Wild Dance x Escudo II) with 6.65 points.