Coby van Baalen Back in the Show Ring 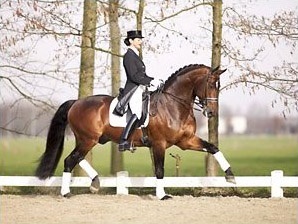 Former Dutch Olympic team rider Coby van Baalen is back in the show ring. After the retiremenat of KWPN breeding stallion Olympic Ferro in December 2002

and one outing with her then 6-year old FEI young horse at the 2003 World Young Horse Championships, Coby van Baalen was no longer seen in the show ring.

The Grand Prix rider from Brakel, The Netherlands, took a step back and again focused on being a trainer. She did this with much success, coaching her daughter to the 2004 Olympic Games and her students to winning medals in the Dutch and Belgian Pony, Junior and Young Riders' teams.

The first weekend of November has brought about a new change in Coby's career. Van Baalen was back in the FEI show ring with two horses. Aboard her own bred KWPN gelding Pasternak DVB (by Gribaldi), Coby won the Prix St Georges in Ermelo and placed third aboard Kigali (Wolfgang x Voltaire). The bay KWPN stallion Kigali, who is owned by Arend Zoer, is a reformed show jumper. As a 6-year old Kigali won the World Young Horse Show Jumping championships in Lanaken, Belgium. Coby van Baalen and Johan Hinnemann have trained the impressive bay stallion into an FEI dressage horse.