Johan Rockx Back In the Picture with Tango 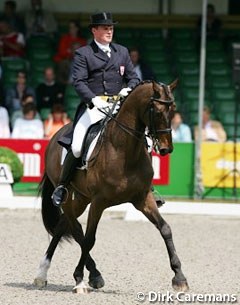 Dutch Grand Prix rider Johan Rockx has ridden himself back in the picture with his upcoming Grand Prix talent Tango. Dutch chef d'Equipe Sjef Janssen noticed Rockx' steady improvement at the CDI-W 's Hertogenbosch and has admitted Rockx to the Dutch B-Team.

Rockx made his Grand Prix debut with the Dutch warmblood gelding Tango (by Sit This One Out xx x Symfonie x Ornaat) last year and competed at the 2004 CDIO Rotterdam and 2004 Dutch Dressage Championships. At the beginning of the 2005 show season, the combination showed impressive progress by winning the national show in Didam, The Netherlands.

"He's been competing at Grand Prix level for little over 11 months and is still developing much," Rockx told Eurodressage. "His piaffe and passage are his strong sides, but he needs to get more confirmed in them, so that it really shows at competitions." Rockx added that Tango is a very sweet, dependent horse, but can be really hot to ride, even though it doesn't show from the outside. "The hotness is working in his advantage for the Grand Prix," Rockx stated.

Johan discovered Tango as a 10-months old foal in the field and asked the owner if it was for sale. "The owner said that Tango was his wife's future dressage horse and he wouldn't sell it. I told him to call me as soon as the horse came up for sale. Apparently, the owner remembered my words very carefully, because 6-years later he rang me up. Tango was already 7 then and the wife hadn't done anything with him. Tango enjoyed a great youth for a long time and had a late start in dressage," said Rockx

Under Johan Rockx the bay gelding is now in business on the Dutch dressage scene and is a talent to watch for the future. Rockx lives with his wife Canadian Penny Zavitz in Essen, Belgium, where they run a small, professional dressage facility called La Fazenda. They have five Grand Prix horses at the moment (Heyu, Kondor, Maverick, Tango and Lodinho) and are training several youngsters. Rockx, however, is the most proud of his two children, Thalia, 4, and Alexander, 1. "We are enjoying the horses, but actually the kids are much more fun," Rockx joked.