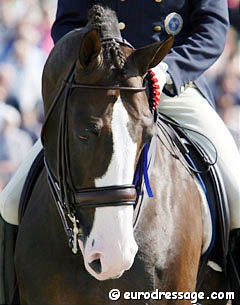 Jan Brink's number one Grand Prix horse Bjorsells Briar suffered from a minor colic attack on Thursday after his arrival at the CDI Lingen. The 38° C heat in Germany caused Briar to feel colicky, but thanks to swift treatment the stallion is no longer in any physical danger.

"I saw it immediately in his eyes when I went into his stall. We drove him to the equine clinic straight away," Jan Brink said. Fortunately, the 15-year old Swedish warmblood stallion recuperated fast and did not need any radical treatment like an operation.

Jan Brink and Bjorsells Briar are the anchor for the Swedish Dressage team that will compete at the 2006 World Equestrian Games in Aachen, Germany, August 20 - September 3, 2006. Brink will only compete at one more show before Aachen (CDI Falsterbo next week) and will give Briar plenty of time off in order for him to be fit, happy and healthy for the Games.