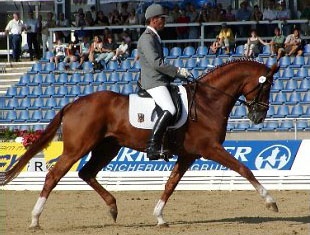 The Hanoverian licensed stallion Worldly has been sold to Xavier Marie's Haras de Hus in France. The 10-year old stallion by Weltmeyer out of Boleisa (by Brentano II x Ludendorff) will be trained and competed by De Hus's stable rider Jessica Michel.

American owner Elizabeth Page-Lewis, who had leased Worldly to Landgestut Celle, sold her stallion to the French millionaire Marie, who is also known as having been the last owner of the World Champion mare Poetin.

Worldly was the winner of the dressage phase of the 2000 Stallion Performance Testing, scoring 143,20 points, and became overall reserve champion. Under Wolfhard Witte, he placed third in the 4-year old riding horse class at the 2001 Bundeschampionate. As a 6-year old, he placed seventh at the 2003 World Championships for Young Dressage Horses.

To date, Worldly has covered more than 1150 mares and has 11 licensed sons. Worldy ranked fifth on the 2005 FN Breeding Value Index, behind Furst Heinrich.