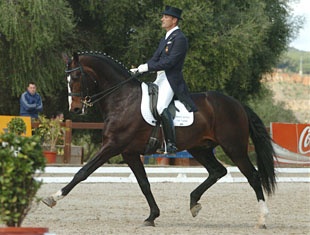 A new Spanish star combination has been born, Carlos Torrell Jane and Upido C-TL . At the 2009 Sunshine Tour CDI in Vejer de la Frontera, Spain, the Barcelona based Torrell has reached the highest echelons at small tour level with his Dutch warmblood Upido C-TL

and proved that they have much in store for the future.

The 2009 Sunshine Tour was one big conquest for Torrell who consistently placed in the top five in a field of international stars such as Lone Jorgensen and Beatriz Ferrer-Salat. The first week he twice covered third place at small tour level with 68,158% and 67,632%. One week later he won the Prix St Georges with an impressive 71,228% and ranked third in the Intermediaire I (68,596%). A true consistent scorer, Torrell finished the last week of competition on the Sunshine tour with a triple second place scoring 69,421%, 68,316% and 70,917%. 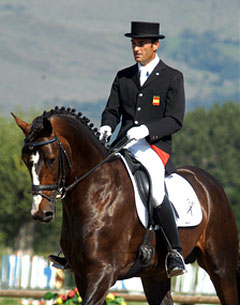 "My experiences at the Sunshine Tour were fantastic," Torrell told Eurodressage. "To compete at this level and placing second in the finals made me very happy. It gives me hope for the future and hope makes your world move!"

Braving incredibly windy weather at the Sunshine tour, the three-week dressage event was an outstanding learning experience for Torrell and his 8-year old KWPN stallion Upido. "Upido and I improved much test by test. We learnt especially to have confidence and to stay calm in the arena, even while we had really bad weather with wind and rain for many days."

Torrell's partner in crime Upido C TL is a Dutch warmblood stallion by Ferro x Amethist, which he discovered at a small breeding farm in The Netherlands when the colt was one and half years old. Torrell purchased him immediately with his partner Francisco Triquell, a Spanish breeder and owner of the stud farm Circulo Alferesi Yeguada Las Tijeras. 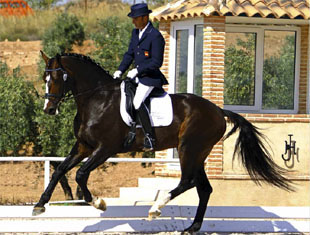 Carlos has been training Upido since he was a youngster. He won the 6-year old Spanish Young Horse Championships with him in 2007 and was reserve small tour champion in 2008. "He is a very special horse with a good mind," Torrell explained. "He is always co-operating and learning so fast. His capacity to understand the rider is outstanding. He's such a sensitive and strong horse with good movements."

Torrell sees distinct Grand Prix potential in Upido and is slowly leading him up the levels. The dark bay sire is a licensed stallion and breeding significantly in Spain. "He is covering mares but he knows how to behave himself," said Torrell, adding that, "when he is not covering, he really is a normal, quiet horse." 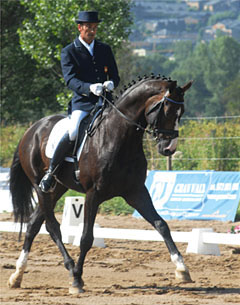 The 40-year old Carlos Torrell has been a professional rider since he was 16 years old and runs a sales and training facility with thirty dressage horses and young horses in the small town of Granollers, close to Barcelona. His daily job consists of training horses of all levels. When he's not in the saddle, Torrell is on the ground teaching his students and selling horses. He is regularly hired as clinician in Spain and the U.S.A. Though Torrell trains independently at home, he has trained on several occasions with the Spanish team with team coach Jan Bemelmans.

While Upido is the celebrity of the barn, Torrell has four more competition horses of which he high hopes. The 9-year old Dutch bred Thompson (by Metall) is the 2008 Spanish Champion at small tour level and is currently schooling Grand Prix. Torrell also has a 10-year old Hanoverian mare by Laptop which is coming along at Grand Prix as well. He'll campaign a 7-year old Don Frederico offspring at Prix St Georges level this year, while the 5-year old Hanoverian mare Deborah (by Davignon x Weltmeyer) is his hope for the future. 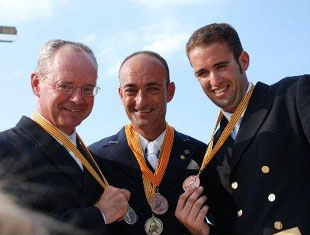 "Deborah has a lot of talent. She's sensitive and has so much elasticity in the back," said Carlos. "For her learning is a pleasure."

Torrell's next show stop is scheduled for the 2009 CDI Saumur in France at the end of April. His dreams and goals for the future are no different from any serious, ambitious equestrian athlete. "I want to continue training for and competing at international shows until we are ready for Grand Prix, hopefully this summer; but eventually my goal is like all riders to arrive at the World Equestrian Games and Olympic Games."