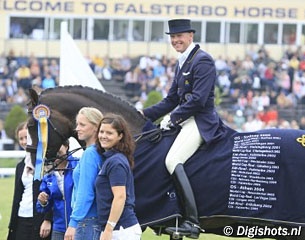 His final international championship was the 2009 World Cup final in Las Vegas in April, where he also retired his top horse Briar 899 after ten years of international competition.

"I indicated to the Swedish Olympic Committe already last year that it I would not aim for another Olympics," said Jan who did three Olympics in a row with Briar. "I said then that after Hong Kong I would take one year at a time. I have given it thought, and now made the decision in agreement with the team management and my horse owners," explained Brink.

" I am the kind of person who goes for all or nothing, and I know what commitment is needed to prepare for championships. I was considering doing (the WEG in) Kentucky next year, but then you are half way into an Olympic cycle, and then I thought I might as well stop now. I feel very content with the career I have had," Jan said. Brink will be 49 in August.

He first came to prominence and built his business on producing young stallions, incidently parallell to Swedish show jumping Olympic medallist Rolf Göran Bengtsson. He has won seven international championship medals, with three different horses; Kleber Martini, Björsells Fontana and Björsells Briar. That is more than any other Swedish rider in history. He won individual European silver in 2003. He also won 32 international Grand Prix classes, including the Aachen Grand Prix championship in 2005, beating Anky van Grunsven and Salinero. He was first selected for the Swedish dressage team in 1989.

"This does not mean that I stop competing ! I will compete as much, or more, in Sweden in order to produce younger horses," Brink said.

He will also concentrate on coaching his students, including former team mate and partner Minna Telde and protege Sarah Henrietta Källström, who is a leading Swedish dressage talent and on his training centre and stallion station Tullstorp, plus family life with wife Catharina.

His other committments include being co-organizer of the dressage events at Falsterbo Horse Show, member of the board of the Swedish Warmblood Breeding Association, and the dressage committee of the Swedish Equestrian Federation. He gives clinics abroad in Brazil and lately the United States, and straight after Falsterbo will leave for one week in Sao Paulo. In his yard are two approved stallions and coming Grand Prix horses; Briar’s son Biggles 1015 and Okeanos 1097, who is an ”almost” full brother of Briar (same sire, dams full sisters).

"What is happening with them is a natural question. In the near future I will continue competing them in Sweden, later they will be placed with other riders, either through a sale or contacts. It is well thought out with the owners," Jan said.