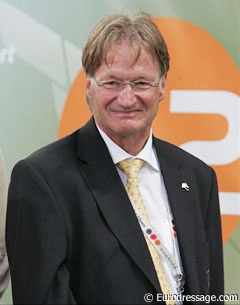 One year later a giant leap forwards has been taken in the development of the dressage sport thanks to the DTF and an new Dressage Committee should now ensure that the right track is followed in the future.

National Federations had to vote between DTF chair Frank Kemperman, show director of the CHIO Aachen, and O-judge Wojczek Markowski as chairman of the new dressage committee. Kemperman won the vote

“I’m very honoured and pleased to be chosen for the committee,” said Hunt. “It’s an exciting time for dressage and with this committee it’s a new group of people and new chairman (Frank Kemperman) who I’ve worked with in the past and found to be very clear and direct. The reinstatement of this committee marks a big turning point for the world of dressage as we look at new proposals including a supervisory panel, which will sit above and monitor the judges.”

Dressage Task Force member Robert Dover is very pleased with the constitution of the new Dressage Committee. "I congratulate these six people and know their wisdom and influence will bring about great change for the sport of Dressage for which we on the Task force worked very hard during the past year to initiate," Dover stated.

The Task Force’s proposal on the new format for the Olympic Games was adopted: in the future a national team will consist of three riders with no scratch score + one individual combination. Furthermore, the new Judging Systems will be initiated in pilot programs throughout next year.

"I am personally very gratified that the membership recognized the value of the efforts made by the Task Force to produce a more fair, transparent and understandable sport which the world will embrace and assure the future of within the Olympic family," said Robert Dover.