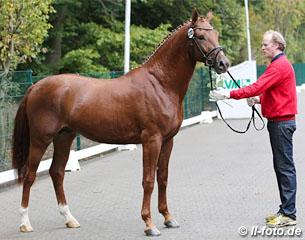 In the spring of 2012 the German Oldenburg society made a brave and logical move to test a new format of Stallion Licensing in which the young colts are allowed to mature to the age of 3 and are presented under saddle for approval. The new concept was applauded by many. However stallion owners see less commercial advantage

to the new, more animal friendly way of approving stallions and are pressuring the breed societies to stick to their old guns.

With the "traditional" stallion licensings fast approaching in October and November for the Hanoverian, Westfalian, Trakehner, Holsteiner and Oldenburg society, little proof has been shown that the new format will be adopted by any of them in the near future.

Eurodressage talked to Katrin Burger, the eloquent breeding director of the Oldenburg society, who explained that the commercial interests of stallion owners as well as the society conflict with the switching of format for all German breed societies.

"We discussed the German licensing system with all the German associations, as we have the opinion, that a licensing under saddle (like for example the KWPN or the Danish warmblood do) would bring better results for the German breeding program," Burger stated.  "The problem is, that everybody knows, that you might select the stallions better after having seen them under saddle, but the market is much better in autumn."

For these reasons none of the other associations wanted to change their system. Burger added that this "would mean that our Oldenburg stallions would have been presented at other licensings, if we wouldn't have offered our own licensing in autumn, because the stallion owners for sure want to sell the stallions. And at the end for sure we also need the money out of the stallion auction in autumn."

The commercial interest of selling a young stallion quickly at the age of 2,5 seems to have been favoured to letting mature the horse to the age of 3 before he gets licensed. Most young colts are professionally "prepared" to show off fancy gaits in-hand but as soon as a saddle lands on their back, they loose that flash, self carriage and bouyancy with which they were able to impress the crowds, licensing committee and eager buyers. Yet if all breed societies would agree to switch to the same format and synchronize their licensings to the spring, there would be no commercial competition amongst them and prices would no longer deflate.

The Oldenburg society has made the decision to offer both formats of licensing (an autumn and spring licensing) until 2014 and then they will decide again.

"To offer both versions might be a a good chance for our breeders/stallion owners anyway, as they can decide whether to bring in the young stallions early in spring or wait until autumn and save costs," Burger explained. "They also have the possibility to show horses which were not taken in autumn again for the spring licensing, if they have developed well and do a good job under saddle."

The number of stallions presented at the pre-selection for the 2012 Oldenburg November licensing was already smaller than years before. Maybe this is a sign that some breeders and owners are deliberately waiting for the spring licensing to give their horses more time to develop.