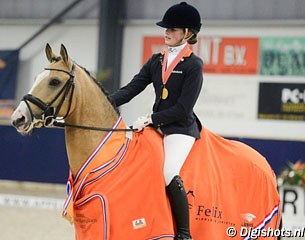 "I didn't expect to win," van Zwambagt commented after her victory. "It's my first big title with Coco." Febe had the choice to ride either of her two ponies at the Indoor Championships but preferred Coco Jambo of Dr. Watson "I have a bit of a better click with Coco. He was totally on form today," said the 15-year old. "Yesterday during training he went really bad but today in the warm up he felt very good."

Trained by Nicolet van Leeuwen and Seth Boschman,  Febe van Zwambagt is working on a big future with much dedication. When asked what makes her a good rider, she said "I can ride very precisely and stay calm." Febe's goal of the season are the 2013 European Pony Championships in Italy.