Briar to Move to Great Britain 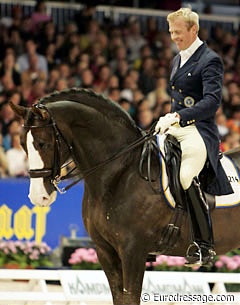 Swedish warmblood licensed stallion Briar has found a new home in Great Britain. He will be standing at stud at Ken Rehill's The Stallion Company for the 2013 breeding season.

Bred and owned by Hans Ynge Goransson, the now 22-year old Briar will be moving to fresh breeding ground in the U.K. "Briar already has offspring in the UK and with this move the breeders will have easier access to his semen, and I'm sure that we will see even greater strides in UK breeding," said Goransson.

Ken Rehill commented, "we've never had a dressage stallion of this quality or world ranking in this country. He will be a big hit and there is already a lot of excitement about his arrival."