A Swiss Junior Riders' One Two at the 2013 CDI Nice 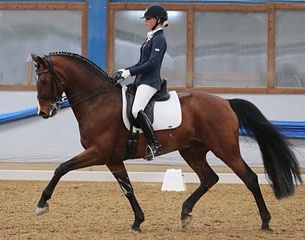 Taking centre stage at the 2013 CDI Nice two very talented junior riders from Switzerland, Estelle Wettstein and Caroline Marie Scheufele, blitzed the field to claim first and second spots in all three of the junior classes on 30 March - 1 April 2013.

"Nice was a really nice competition and the place was great," Estelle told Eurodressage. "Overall it was a really good experience."

Begin 2013 Wettstein was forced to say a final goodbye to ponies after having done a combined year at pony level and young riders with her mom's Grand Prix horse Le Primeur in 2012. Estelle has now settled for the Junior division aboard a new horse, the 8-year old Westfalian Romocantin (by Rockwell). In Nice she finished with a 68.676% junior team test, a 71.342% individual and a 72.800% in the kur winning all three classes.

"Moving from ponies to juniors has been quite easy for me as last year I could already ride young riders with Le Primeur. Plus, the ponies were much the same as horses to ride," she explained. While she is sad that the pony time is over, Estelle felt that she was ready for the move to the bigger class. "I will miss the ponies because I really loved them. However, I think after 5 years the time has come to go onto horses."

Her winning horse, Romocantin, was recently purchased from Mr Lualdi. "He is a horse with a lot of quality and three really good paces but he needs more experience. He is very nice and also playful with people."

Estelle enjoys riding Romocantin but knows the horse needs more competition experience. She hopes that one-day he will go all the way. "During all my years in the ponies classes I learnt so much; particularly the ability to ride very accurately and with feeling. However, now, I want to go on to Grand Prix!" With wins already under her belt at Intermediaire II level on Le Primeur, Estelle has matched up against some of Switzerland's elite and feels she is ready for the next challenge. "I will continue to train at home in Zurich with my parents (Marie-Line and Ernst Wettstein). My aim is to gain experience with Romocantin and to train him up to Grand Prix level."

Coming in a close second, fellow countryman Caroline Scheufele earned a 66. 622%, a 67.526% and a 68.750% and also enjoyed the Nice experience. "Nice was great,” said the 17-year old. "I was really happy with the results. Being there with Estelle and my great trainers - Pamela and Ted Jonker, made it even more special. Plus, my horses were amazing!"

According to Caroline, the kur was the highlight of her CDI performance but she feels that in the team and individual tests she can do even better. "My kur was designed by Ralf Roder to the music of Madagascar and Spirit and I was very happy that I did a good job of it," she said. "My horse felt really good throughout the competition but I know it could be better as I only made a few mistakes. These tiny errors were, for the most part, my own fault and, in particular, I am still working on getting better flying changes."

Overall, both Swiss youngsters enjoyed their Nice time and despite the low attendance, the CDI still provided a great atmosphere, particularly for the winners.