David Stickland: Predicting the Team Medals at the 2013 European Championships 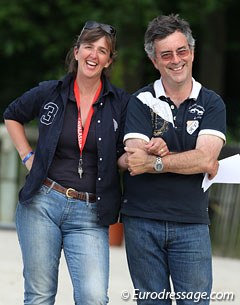 Predicting the result at the 2013 European Championships in Herning got much tougher when Mistral Hojris had to withdraw! But it also got much more interesting with three teams each capable of taking the gold medal on a good day. Germany, Netherlands and Great Britain (a familiar trio these days on podiums), and to be honest they could finish in any order. It is going to be exciting sport with the result going down to the wire and the very last ride.

In London last year it wasn’t so hard to get the order (Though I think GDA did a pretty good job on the actual scores too!) but by my reckoning these three teams would be expected to finish within about 1% of each other. But if one or two riders in any of the three teams really get their best possible ride this week, then that can tip the whole medal tally in their favor.

In the table I show what I expect to be the top three teams, in the middle column the predicted scores if everyone hits where their trends are leading today. But in the third column I show how this can change if one of the riders in the team hits their best score. (Oddly enough it's the second rider - the one I expect to get the second highest score in the team - that I estimate has the best chance to really raise the average by excelling – so, plenty of pressure on them!)

Germany has the best chance to win; if all their riders reach prediction then they should win, but they can’t rely on anything. If either of the other nations excel, achieving their personal best 2012-2013 scores again here at Herning, then doing the predicted trend will not be enough. I can’t imagine a more exciting European Championship; riders are going to have to do their best, and it is still going to be very close. And if they have any mistakes, then Denmark and Sweden will be waiting to jump onto the podium.

I am also predicting that 8 nations will average above 70% in the final team table (Eurodressage will have a sealed copy of the full predictions to check out after the results are in).

And if the Team medals are hard, I’m not going to even try for the Freestyle! I think I can guess the podium, but any one of them could be on any step. Though personally I think this may be the year for Helen Langehanenberg to take the World Cup and the European Championship Individual title. (Or maybe Charlotte, or maybe Adelinde…).

Wish that I was one of the lucky ones at Herning watching the sport this week! It is going to be very exciting and the teams will need to take off the brakes and go for the win.