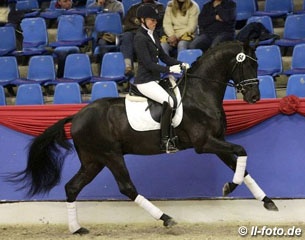 The newly licensed black stallion Fursten-Look became the price highlight of the 2014 Oldenburg Elite Spring Auction, which took place in Vechta on 5 April 2014. The colt achieved a knock-down price of 350,000 euro.

The second most expensive horse at the auction was the mare Sandro Rubina (by Sandro Hit x Rubinstein x Feingau). She sold for 100,000 euro to a Hamburg based dressage rider.

The reserve champion of the saddle licensing, Bergolio (by Bordeaux x Rosier) sold for 80,000 euro to local clients.

The show jumper Chaccodello (by Chacco Blue x Quattro B) sold for the fourth highest price of the day, 75,000 euro, to Swiss clients.

The average price for an Oldenburg sport horse at this auction was 40,000 euro.