Noseband Special: Part IV: The Thicker, the Wider, the Better? 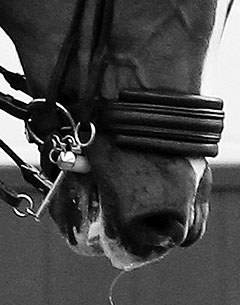 While the dressage world is diligently discussing at length the enormous evolution horse breeding and the sport's popularity has made over the past three decades, I strongly feel that the evolution of tack also deserves some attention. A photo taken at a recent international show prompted me to write these lines. You might be surprised to hear that I mean the double bridle noseband (aka cavesson).

When one browses, like I passionately do, through the decades of dressage at the highest level by looking at books, photographs or old video-clips, you won't discover anything very eye-catching for many many years, apart from the fact how plain most of the tack looked compared to  present day. No big knee-roles or deep seats in saddles, no chic saddle-pads and definitely no refined looking double bridles. It seems like the only thing that really mattered was the equitation itself.

Flat nosebands of the Past 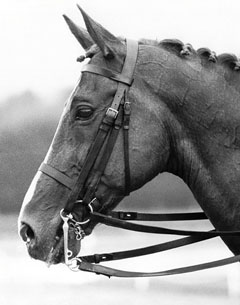 Maybe it would catch your eye that nosebands in double-bridles were almost all of the same flat leather-type, still seen in Great Britain in hunter classes. Overall they were not padded and mostly without anything very fashionable about it. Padding on the other hand seemed dispensable as most nosebands looked comparatively moderately closed, so there was no big pressure on the sensitive chin-groove-area nor on other highly sensitive parts of a horse's bony head.

So just finding a photo of a slightly padded noseband back then was unusual and some horses even competed without anything on the nose-ridge, like for example a Dutch horse did in the 1936 Olympic Games or few French horses before the war.

It sounds astonishing now but a noseband with a contrasting colour was even worth a few sentences in the press in the old age, like at the 1960 Olympic Games in Rome when an Argentinian horse wore a noseband similar to the ones used today, rather broad and padded in a contrasting white colour. 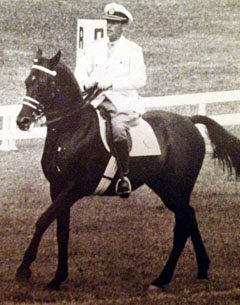 A German journalist remarked: „The noseband(...) was padded with white cloth which went beyond the leather. This effect revived the overall picture.“
Even though the obvious subtle effect a more decorated noseband can have on the onlooker was already recognized back then, it took many more years until the double bridle cavesson came into its own as a fashion accessory and surely something beyond it. In the 1970s the contrasting coloured padding was nothing special anymore, but double bridle cavessons were still far from what is presented today.

It must have been somewhere in the 1980s or 1990s that a clever saddler or trainer must have invented the Swedish buckling (aka crank) and with it created a new type of double bridle cavesson. The width and thickness of padding seemed to grow as much as the popularity of what became known as the “Swedish or crank cavesson”.
The expanded width offered saddleries great possibilities to play with contrasting stitches, crystals, different kinds of materialsand forms which were and are well appreciated by riders.

As the FEI only forbids “tack decoration” in form of “ribbons and flowers” (2014 dressage rulebook, Article 428, 5), in principle the horse world today could well live with the horse's nose-ridge being used as the “subfloor” for decoration. It would have been too good to be true. Cavessons nowadays are much more than that!

The Modern Noseband, Function or Fancy? 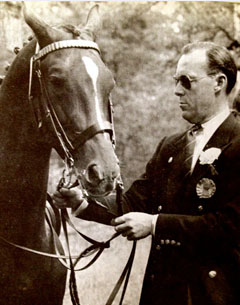 The reality is that today we see an evolution within the Swedish cavesson which rules the roost in international competitions and the tack-shops around the globe following the demand of the customers. The width and thickness, which always outshone the traditional cavesson noseband used for such a long time, has now increased to proportions that the beauty and nobility of the mostly refined horse-heads is ruined.

Of course in a dressage world which has never been more fashion-orientated than today this must have a reason outside aesthetic consideration; probably a more practical one.

The spontaneous optic impression that somebody tries to muzzle his horse like on the top photo might not be totally out of place. It makes me wonder why someone needs such a broad noseband which rubs either at the cheek bone or the chaps of the mouth? Why is there extra padding under the already exaggerated padding the noseband itself has?

The thick padding which encloses the sensitive bony chin groove might make riders assume they use a noseband in favor of their horse's comfort. This is completely wrong because as soon as the crank buckling is pulled tight the padding presses onto neural strands running along the horse's head and into the mucous membranes of the cheek which are in turn pressed against the molar teeth. It causes considerable discomfort. Of course there are always exceptions who just like to see such over-dimensioned nosebands on their horse's head and if they use it only for optical reasons and correctly fit it, they should not feel intimidated by these objections. However if riders intend to misuse a cavesson as a mouth-shutter to camouflage a strong contact or other training problems, the cavessons of today offer greater possibilities than those before in the history of equitation.

It surprises me that some riders are not embarrassed to visibly crank their horse's noseband in order to camouflage the bad mouth of their wrongly trained horse. It can only be explained by their indifference, their ignorance, or the assumption that the more impulsion their horses show, the stronger the bit contact has to be. The latter is possible as the tightened noseband will prevent the horse from gaping due to bit pressure.

Why did such cavessons become an indispensable piece of tack to some riders competing at the highest levels of dressage? Two answers seem to be obvious: training methods using considerable force are en vogue and the strong (mis)belief that a horse's mouth should always be closed. At the moment some are maniacal about closed mouths, but some horses just chew a bit more visibly than others, if they are allowed toThe FEI regulations demand a “soft contact” but that seems impossible with a tightly constricted mouth. 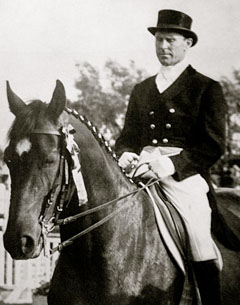 The FEI dressage rule book demands “a cavesson noseband may never be as tightly fixed as to harm the horse” (Article 428,1). Whether this is the case seems to be up to individual interpretation as the tightness of nosebands are hardly ever checked by FEI stewards.

The cavesson noseband which once was nothing much more than a plain decorative piece of tack has made a remarkable evolution, it can now be a striking fashion piece as well as a more than doubtful training aid.

It is a misconception to assume that evolution automatically means positive progress.
In this case the Swedish (crank) double bridle cavesson has become one of the most important accessories for some riders to more or less successfully mask an equitation which contradicts with the requirements written down in the FEI dressage rule book.

Double bridle cavessons: the thicker, the wider, the better? Certainly not!