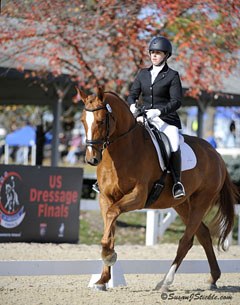 Intense head-to-head dressage competition across 30 championship divisions concluded on Sunday at the Kentucky Horse Park in Lexington for the 2014 US Dressage Finals.  Surrounded by friends and family, emotions ran high for competitors as they rode their way into history and celebrated their success with joyous victory laps before packing for their long journeys back to homes across the country.

A particularly heartwarming moment of the day came during the presentation of the Janine Westmoreland Malone Perpetual Trophy (presented by USDF) to the new Adult Amateur Prix St. Georges Champion, Adrienne Bessey of Region 7.  Bessey and her Danish Warmblood mare Dido ran away with the title on an impressive score of 71.491%, more than six points better than the next-placed competitor.  With this score, Dido (by Royal Hit) also earned the Lloyd Landkamer Perpetual Trophy for FEI Highest Scoring Mare, presented by Janet Foy.  It was an emotional win for Bessey, a family practice physician in Thousand Oaks, Cal.   "My test felt great, she was perfect for me and did everything I asked," she explained.  "I hadn't ever thought of traveling this far for a show, but some of my friends in California were coming and asked if I wanted to go, so I said 'sure, why not'.  I can't believe how well organized and fun this show is.  The atmosphere is almost indescribable, it feels very big but at the same time everyone is so supportive of each other.  I'm so glad I had the opportunity to come here."  Earning Reserve Champion honors was Jennifer Van de Loo (Holly Springs, Miss., qualified in Region 2) who rode her Oldenburg gelding Lanzelot 99 (by Lord Sinclair I) to 65.000%.  "He is my schoolmaster, and this is just my second year at the FEI level," said Van de Loo.  "He's the best horse ever and I'm so thankful for him.  It's an honor to be here and I've enjoyed it so much."

The morning's Prix St. Georges Open Championship became a clash of the titans as incredibly talented horses and riders battled for the win.  Saturday night's Intermediate I Open Freestyle Champions Angela Jackson and Allure S (Dutch Warmblood mare owned by Kerrin Dunn) returned to the ring no worse for wear to once again post a top score of 71.491% and lead another victory lap.  "She was still asleep this morning when I had to get her ready, but she got up and felt great!  It felt like the best Prix St. Georges test I've done with her all year," said an elated Jackson of her partner.  "Now we're going to go home, take a little time off, and then start preparing for a move up to the Developing Horse Grand Prix."  Reserve Champions Mette Rosencrantz (Topanga, Cal., Region 7) also has big plans for Anne Solbraekke's Hanoverian gelding De Noir 3 (De Niro x Matcho) as she is considering the pursuit of a U.S. Team berth for next year's Pan American Games in Toronto.  The elegant pair followed up their Intermediate I Open Championship on Friday by finishing a close second today with a score of 71.009%.  "I had a good ride, he's a great show horse, and I enjoy riding him," Rosencrantz said.  "There were so many talented riders and horses in this class, it was amazing.  "Everyone was breathing down each other's necks because we're all here for the same reason - to win."

Amy Stuhr Paterson (Lee's Summit, Mo., Region 4) thought she might be in trouble as she prepared for her Intermediate B Adult Amateur Championship performance with Greenwood Sporthorses' Dutch Warmblood mare Wies V/D Klumpert (by Future x Sarina V/D Klumpert by Havidoff).  "My horse was incredibly wild in that ring yesterday when we were just hand walking around the perimeter," she explained.  "She was literally passaging in-hand, so I was a little bit worried about what today might bring."  But the lovely Dutch Warmblood mare rewarded Paterson's trust by earning a score of 68.690%, good enough for a narrow victory.  "She ended up using all that energy for good and not evil, so I was thrilled with our ride," said Paterson, who missed last year's inaugural Finals due to battling breast cancer.  "It's a tricky test, but she was honest and with me the entire time.  It meant a lot to me to be here, and I definitely want to show at Grand Prix next year and come back."  Friday's Grand Prix Adult Amateur Champions Alice Tarjan (Frenchtown, N.J. Region 8) and her young Oldenburg mare Elfenfeuer returned to claim Reserve Championship honors today with 68.333%.  "She handled being outside really well today.  We had some mistakes but we're green at this level and we have plenty of work to do and room for improvement," said Tarjan.

Heather Mason of Lebanon, N.J. (Region 8) found great success at last year's inaugural Finals, and she returned to Kentucky to claim yet another title with her 10-year-old Dutch Warmblood gelding Zar by topping the Intermediate B Open Championship on a score of 69.286%.  "This is a great show and so well-run. I love it, and my clients all love it.  I think it’s just a fun show to go to, and it's a lot bigger this year," said Mason.  "As for Zar, I think he’s actually going to be a better Grand Prix horse than a small tour horse, just because his piaffe/passage work is pretty special.  He's kind of a hot horse who is very honest but incredibly scared of everything, so I had a lot of horse under me today! But he was really good and he held it together."  Also returning to the Finals was Eva Oldenbroek Tabor of Medina, Texas (Region 9) who earned the Reserve Championship with her flashy Dutch Warmblood gelding Uberlinus (by Metall) with 66.865%.  "I've have him since he was three years old and he’s 13 now, so I know him inside and out," said Tabor.  "I’ve been through some ups and downs with him because he’s sensitive and he's not easy. But we’ve worked our way up from the young horse classes and here we are!  Today was a wonderful day - he was flawless.  I was here at the Finals last year and it made me want to come back. The arena is amazing and the footing is amazing. It’s probably the most beautiful place I’ve ever competed in."