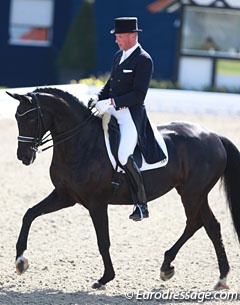 Bred by Heinrich Lahmeyer and previously owned by Ilka von Ludowig, Diva Noir was trained by her rider but recently relocated to horse dealer Hartwig Burfeind to be sold.

Under Burfeind and his partner Juliane Brunkhorst Diva Noir won and placed in several national Grand Prix classes, including at events in Bargestedt, Hanstedt, Behrendorf and Werder.

The elegant dark bay mare competed in the first Louisdor cup qualifier in Hagen under Hartwig Burfeind, where she was qualified on the 12 spot for the Sunday final in which she finished 11th with 68,76%.

The 25-year old Louisa Lüttgen was a highly successful German team rider in the youth divisions, but struggled to make the transition to top level senior performance sport. In 2012 she rode her last year on the German team after having represented her country at no less than seven European Championships from ponies to young riders level. She only competed once internatonally as a senior in 2015 aboard D'Arcy Diamond.

Louisa manages her family's beautiful dressage stable Gut Mödrath near Cologne while her sister Anna-Katharina Luttgen seemed to have put competitive riding more on the back burner. Anna Katharina competed twice in 2015 and only once in 2016 so far.

With Diva Noir Louisa aims to break through at Grand Prix level. The pair made its show debut at a local show in Krefeld on Sunday 18 September 2016. They finished seventh in a field of nine with 63.060%

"Louisa does not manage the stable," Louisa's father Ewald Lüttgen stated a few days after the publication of this article.